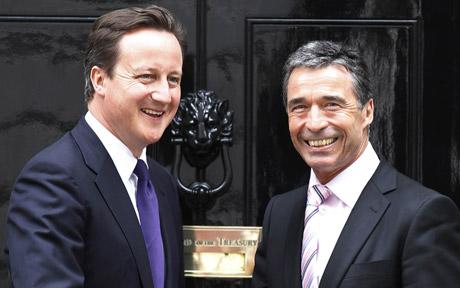 From James Kirkup, the Telegraph:  David Cameron’s signal of a five-year timetable for withdrawing British troops from Afghanistan risks encouraging the Taliban to step up their attacks on Western forces, the head of Nato has said.

Anders Fogh Rasmussen, the Nato secretary-general, delivered the blunt message after the Prime Minister said he wanted most British troops to leave Afghanistan by 2015. …

Warning that the Taliban follow political debates in Nato countries “closely”, Mr Rasmussen insisted that Western nations must keep troops in Afghanistan “as long as necessary” and not set clear timelines for withdrawal.

“The Taliban follow the political debate in troop-contributing countries closely. They do believe that if we set artificial timetables for our withdrawal, they can just sit down and wait us out and they will return when we have left,” he told the Daily Telegraph.

“If they discover that through their attacks, they can weaken the support for our presence in Afghanistan, they will just be encouraged to step up their attacks on foreign troops. …”

“We can have our hopes, we can have our expectations, but I cannot give any guarantee as far as an exact date or year is concerned,” he said. “All statements from all politicians have been based on the condition that the Afghans can actually take responsibility themselves. …”

“The transition dividend must be invested in other parts of Afghanistan,” he said. “Even when we transition, it will not be withdrawal.”  (photo: Reuters)