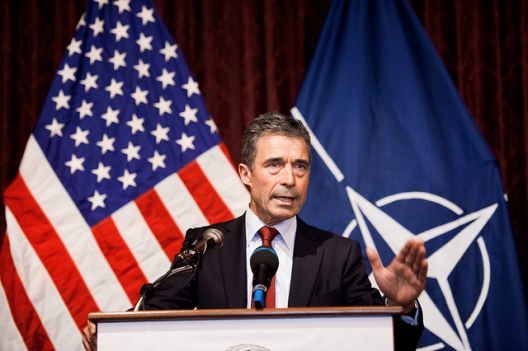 The soldiers who stormed the beaches of Normandy and who parachuted into the fields of northern France were upholding a fundamental truth: that you can’t have security on one side of the Atlantic without security on the other. Our continents can only be safe together. Or we will be insecure apart.

In the wake of World War Two, NATO became the embodiment of this fundamental truth. Our transatlantic alliance was formed to defend our freedom. Personal freedom. Political freedom. And economic freedom. . . .

Of course these are not just our values. They were enshrined in the United Nations Charter well before NATO’s creation. They were the inspiration for an international order based on democratic institutions, open economies and the rule of law. This rules-based order has brought all our nations, and others across the world, peace and prosperity for over half a century.

This is what is at stake today. Because after the end of the Cold War, Russia took part in creating this world order. It benefitted from it. But its aggressive and illegal actions in Ukraine pose a serious challenge to what we have built together with such efforts. Russia is using military, political and economic means to intimidate and influence its neighbours. And across the globe, we face the prospect of other rising, autocratic regimes using similar methods to pursue their interests, and project their power. . . .

[W]e must enhance our security. Russia’s recent aggression has reminded us that we cannot take it for granted. So we must continue to invest in our defence. And in our security cooperation through NATO.

In this effort, all Allies must shoulder a fair share of the burden. The imbalance between this country’s security contribution and that of its European Allies is both unfair and unsustainable.

In the wake of Ukraine crisis, the US has once again demonstrated its commitment to transatlantic security. All 28 Allies are contributing to our measures to strengthen collective defence – with planes in the air, ships at sea, and exercises on the ground.

But of course, credible defence requires credible resources. And I am encouraged that we are seeing more European nations stepping up. Estonia is already investing 2 % of Gross Domestic Product on defence. And Poland, Romania, Latvia and Lithuania have now pledged to return to 2 %.

At our next NATO Summit in Wales in September, we need to make clear our commitment to stop the cuts and reverse the decline in defence spending as our economies start to recover.

I expect that Allies will make a solid commitment to our shared transatlantic security. To spend more. To spend better. And to keep NATO strong and united. . . .

As NATO Allies, we believe in freedom and democracy. In open economies and the rule of law. But autocratic regimes across the globe think they don’t need to be free to be prosperous and powerful. And it’s not written in stone that freedom will ultimately prevail. . . .

Together, America and Europe are the world’s most powerful force for good. We have preserved freedom. We have prevented oppression. And we have promoted progress and prosperity. We must keep our bond strong so that we can remain a force for good.