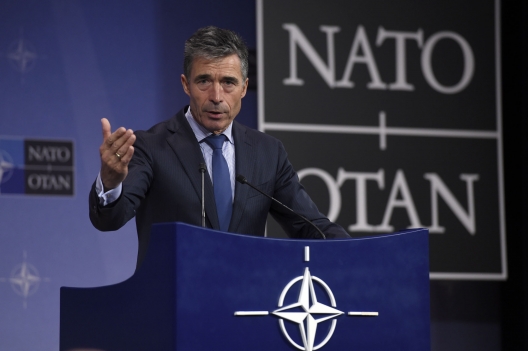 NATO Secretary General Anders Fogh Rasmussen said on Friday a “Russian incursion” into Ukraine had occurred overnight, but stopped short of characterizing it as an invasion.

“Last night we saw a Russian incursion, a crossing of the Ukrainian border,” he told reporters after meeting the Danish defense minister.

“It just confirms the fact that we see a continuous flow of weapons and fighters from Russia into eastern Ukraine and it is a clear demonstration of continued Russian involvement in the destabilisation of eastern Ukraine,” the Danish NATO chief said.

The Guardian reported on Friday that its reporter had seen several APCs crossing the border with Ukraine.

Lithuania’s foreign minister said on Friday he had reports that 70 pieces of Russian military equipment had crossed the border into Ukraine during the night.

“We are very much concerned about the situation developing (in Ukraine) because, on the one hand, we are talking very much about this so-called humanitarian convoy but, at the same time, we see that escalation continues, and we have reports that during the night 70 pieces of military equipment again entered through the border,” Linas Linkevicius told reporters as he arrived for an emergency meeting of European Union foreign ministers.

” If there are any Russian military personnel or vehicles in eastern Ukraine, they need to be withdrawn immediately or the consequences could be very serious,” he told reporters.