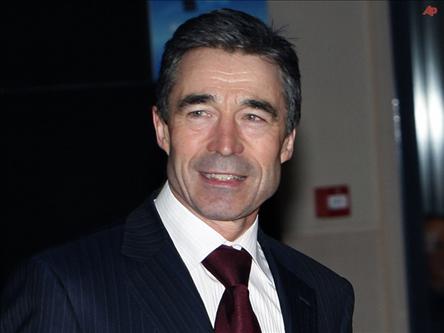 From Anders Fogh Rasmussen, NATO:   Why do we want to cooperate with Russia?

Large parts of Russia, and many Russian citizens, face a missile threat too. And NATO is convinced that cooperating with Russia on missile defence is in the interest of all of us – NATO Allies, and Russia. It makes sense politically. It makes sense practically. And it makes sense militarily.

What does NOT make sense, is for Russia to talk about spending billions of roubles on a new offensive system to target the West.

This type of rhetoric is unnecessary.

This type of thinking is out of date.

This type of investment is a waste of money.

Because, we are not a threat to Russia.

We will not attack Russia.

We will not undermine the security of Russia.

The threats to Russia come from elsewhere. And our invitation to cooperate on missile defence is proof of that.

So where are we on our cooperation? From the beginning, the Allied position has been very clear. We are not talking about a single system. We have taken a decision to build an Allied system. That is a reality. And that will not change. What we are talking about is synergy between our NATO system and a Russian system.

Last week, in Brussels, NATO and Russian Defence Ministers discussed the next steps in our missile defence cooperation. We all understand that the foundation for our cooperation must be confidence and trust.

We could build them through agreeing on political principles and objectives for future cooperation on missile defence. And this should be our next step.

Russia says it wants guarantees. We can give these by agreeing that our systems will not undermine the strategic balance. That they will strengthen each others security – and not weaken it.

But I remain convinced that the best guarantee for Russia is to be part of the process. And to be connected to the system. We should focus on actual cooperation, not abstract questions. This is the best way to enhance transparency and confidence. And it builds up the mutual trust that is necessary to take the key decisions we need to take.

We have already made good progress in a number of areas. Including on the basis of Russian ideas for joint centres.

For example, we could envisage setting up a joint centre where we could look at the ballistic missile threat together, share early warning data, exchange information and share assessments.

We could also envisage setting up a joint centre where we could coordinate our responses. And let me emphasise the word coordinate. It would allow us to ensure we select the best and most appropriate response.

This is the very reason why cooperation between NATO and Russia is important. Because it can lead to a more effective missile defence capability for both of us.

But it can lead to so much more too. Missile defence cooperation can create a virtuous cycle. It can help us to build the confidence and trust to tackle some of the more difficult issues in our relationship. It provides a unique opportunity for us to build greater security and stability across the entire Euro-Atlantic area. And it could lead to a sea-change in the way we look at our relations. That is a political goal worth working hard for. And by taking the political decision to trust each other, it’s a goal we can achieve.