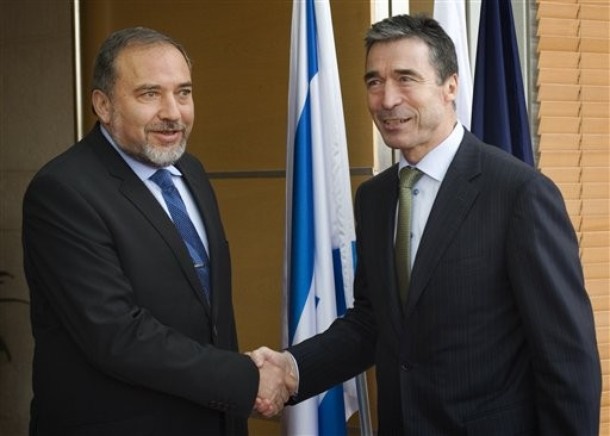 From Amir Oren, Haaretz:  In an interview with Haaretz, (NATO Secretary General Anders Fogh) Rasmussen, the 58-year-old former prime minister of Denmark, also reiterated the "three big Ifs" for NATO involvement in the Arab-Israeli peace-process: an agreement based on a two-state solution, a request from both side that it step in, and a UN mandate. As for the possibility of Israel upgrading its ties with the Alliance and becoming a member, Rasmussen referred to NATO’s charter, limits membership to European (and North American ) countries.

Haaretz: Does the new partnership policy, which may be partly modeled after the Partnership for Peace design, entail the prospect of NATO membership for Israel down the road, as was the case with several PfP countries?

Rasmussen: Let me answer this clearly. NATO’s founding charter only allows for European countries to join the Alliance. It is there in black and white. But we do want to deepen our political dialogue and practical cooperation, and NATO’s new partnership policy makes that very explicit. Let’s focus on that. …

Haaretz: NATO is committed to Afghanistan for the next three years. It also has other military and financial obligations. Member countries slash their defense budgets and contributions, while by your own initiative, headquarters and staffs are being drastically cut. Is it then realistic to expect that even given the right political setting, NATO would be able to contribute peace-keeping forces to the Arab-Israeli arena?

Rasmussen: The reforms we have undertaken are designed precisely to strengthen and to adapt our capabilities to today’s challenges – to ensure we will have the capabilities we need today and into the future. In fact, I believe that the crisis has finally forced us to make some long-overdue changes which will have real benefits in the future.

But the question you raise is fundamentally political. NATO is not a party to the Middle East peace process. The parties themselves and the Quartet are in the lead in this process. I believe that progress toward a just, lasting and comprehensive settlement of the Israeli-Palestinian conflict should remain a priority for the countries of the region and the international community as a whole, based upon a two-state solution in which Israel and Palestine live side by side in peace and security. If an agreement was reached by the parties, if the two parties asked for NATO’s help to assist them in implementing such an agreement and if there was a U.N. mandate, then I think that NATO should be ready to respond positively to such a request. But these are three big Ifs.  (photo: AP) (via: USEUCOM)