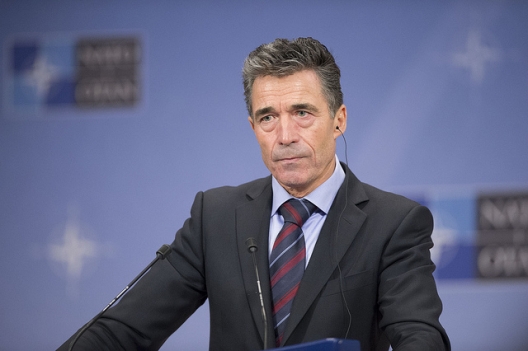 NATO chief Anders Fogh Rasmussen said on Monday he saw a “high probability” that Russia could intervene militarily in eastern Ukraine and that NATO detected no sign that Moscow was pulling back thousands of troops from close to the Ukrainian border.

Asked in a Reuters interview how he rated the chances of a Russian military intervention, Rasmussen said: “There is a high probability.”

“We see the Russians developing the narrative and the pretext for such an operation under the guise of a humanitarian operation and we see a military buildup that could be used to conduct such illegal military operations in Ukraine,” he said.

“There are thousands of Russian troops, well equipped, and we see it as an indication that the Russian leadership keeps the option open to intervene further militarily in Ukraine,” he said. “Any Russian intervention under the guise of a humanitarian mission would be unjustified and illegal.”

Asked if NATO, a U.S.-dominated, 28-nation alliance, could get involved militarily in Ukraine if Russian forces did invade, Rasmussen said it was a hypothetical question.

“However, we are not considering military operations. If the Russians were to intervene further in Ukraine, I have no doubt that the international community would respond determinedly, notably through broader, deeper, tougher economic sanctions that would isolate Russia further,” he said.