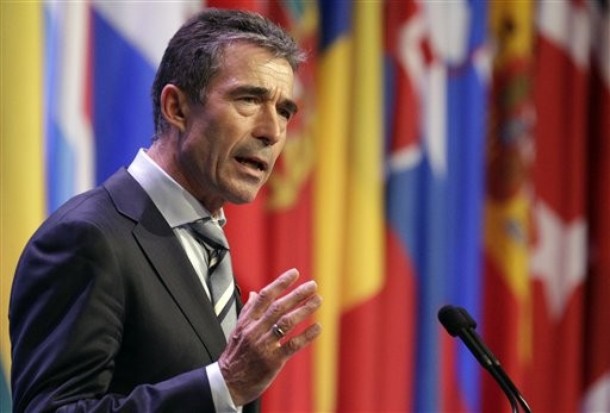 From Paul Geitner, the New York Times:  The secretary general of the NATO alliance, Anders Fogh Rasmussen, said on Monday that the wars in the Balkans in the 1990s illustrated what might befall Syria unless Russia and the West agreed on a  “unified, clear message” to the Syrian government to stop the violence.

In an interview, Mr. Rasmussen said that alliance members were disappointed by the failure of President Bashar al-Assad’s government to comply with the peace plan promoted by Kofi Annan, the special envoy for the United Nations and the Arab League.

Mr. Rasmussen said he agreed with the British foreign secretary, William Hague, who told Sky News over the weekend that the crisis in Syria was starting to resemble the sectarian warfare in Bosnia two decades ago, another time when Russia and the West were at odds over how to stop the violence.

“I think one part of the lessons learned from the events in the Balkans is the serious consequences it may have if the international community can’t speak with one voice, and can’t reach an agreement on how to address the security challenges,” Mr. Rasmussen said. “That’s exactly what we’re witnessing in Syria.”

He repeatedly emphasized in the interview that NATO had no plan or intention to intervene militarily in Syria, as the alliance eventually did in Bosnia and in Kosovo, and more recently in Libya. A United Nations Security Council resolution would be needed to authorize any NATO military action of that kind, he indicated. (photo: AP)