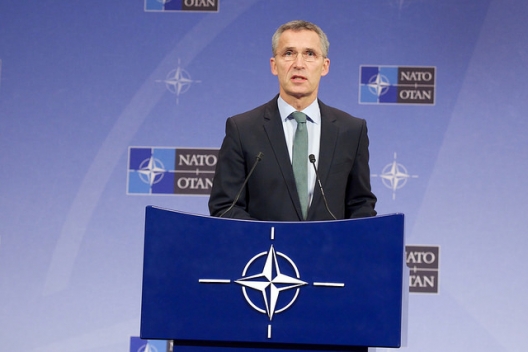 We have just held an extraordinary meeting of the NATO-Ukraine Commission. The meeting was held at Ukraine’s request.

We condemn the sharp escalation of violence along the ceasefire line in eastern Ukraine by Russia-backed separatists.

This comes at great human cost to civilians. We express our condolences to the Ukrainian people for these tragic losses. Thirty civilians were killed and around a hundred were injured in the attack launched on residential areas of Mariupol. The attack was launched from territory controlled by separatists backed by Russia.

Such indiscriminate attacks are unjustified and unacceptable.

The aggressive actions and provocative statements of the separatists are in direct contradiction with the Minsk agreements.

Yet despite its repeated commitments to work for a peaceful solution, Russia continues to provide them with support, training, equipment and forces.In recent weeks, Russia has supplied hundreds of pieces of advanced equipment, including rocket systems, heavy artillery, tanks, armored vehicles and electronic warfare systems.

We call on Russia to stop its support for the separatists immediately, to stop destabilising Ukraine and to respect its international commitments.

We urge all parties to continue all efforts without delay to achieve a peaceful solution, in full conformity with the Minsk agreements.

We reaffirm that an independent, sovereign and stable Ukraine, firmly committed to democracy and the rule of law, is key to security in the Euro-Atlantic area.

NATO Secretary General’s statement on the extraordinary meeting of the NATO-Ukraine Commission, January 26, 2015.

Q. Secretary General, can you tell us if NATO agreed to give any new aid to Ukraine at today’s meeting and is it time to respond positively to Ukraine’s request for lethal aid from NATO? And, secondly, could we get a response to President Putin saying that there is a NATO legion fighting alongside Ukrainian armed forces in Ukraine?

NATO Secretary General Jens Stoltenberg : As to the statement that there is a NATO legion in Ukraine, is nonsense. There is no NATO legion. The foreign forces in Ukraine are Russian. So I think that is in a way the problem. That there are Russian forces in Ukraine. And Russia backs the separatists with equipment and we have seen a substantial increase in the flow of equipment from Russia to the separatists in Ukraine. And we speak about heavy equipment and many different kinds of equipment. NATO is part of a broad international effort to support Ukraine and we all agree that there is no military solution to the crisis in Ukraine. So we stand united in supporting all efforts to reach a negotiated peaceful solution based on the Minsk agreements. And what NATO does is that we provide both practical and political support for Ukraine. Just the meeting today in the NATO Ukraine Commission is a strong sign of the strong political support from NATO and all NATO Allies to Ukraine. In addition we provide practical support. We support Ukraine when it comes to defence reform: modernising their armed forces. We have established trust funds helping them with reforming their defence. In addition we have a trust fund for providing medical aid for wounded soldiers. And tomorrow, NATO defence councillors from NATO allied countries will meet with General Koval here at NATO headquarters. And he’s the deputy secretary of Ukraine’s national security and defence council and he briefed us at the council meeting today and I think that he’s here today, together with a delegation from Ukraine, underlines that we are now actually doing what I think is very important and that is to help them with reforming their armed forces. In addition to that, of course, we support the economic sanctions imposed by the European Union, the United States and others. And I will later today meet with High Representative Mogherini and discuss the very severe situation in Ukraine.