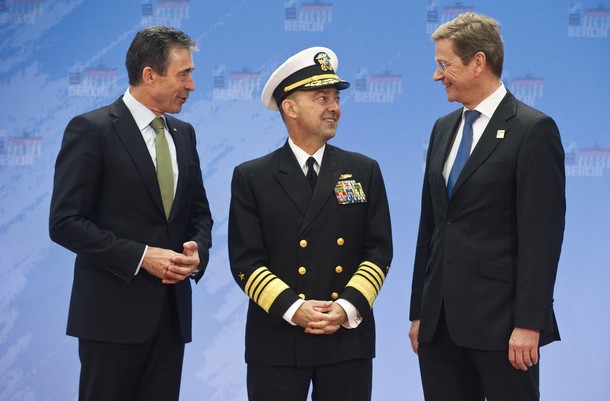 From Stephen Fidler, the Wall Street Journal:  The North Atlantic Treaty Organization needs eight sophisticated ground-attack fighters to carry out its mission in Libya, according to the alliance’s top military commander.

NATO civilian chief Anders Fogh Rasmussen said that Adm. Stavridis’s message to the ministers was that "overall we have the necessary assets to carry out the mission" to protect civilians in Libya. "But of course our requirement changes as the situation on the ground and the tactics of the regime forces change. …"

NATO officials said Adm. Stavridis was seeking eight fighters to fill a shortfall left by the U.S.’s withdrawal into a support role, to bring the strike-fighter contingent up to 80. Adm. Stavridis also said NATO could also do with more tanker aircraft for in-flight refueling, they said.

"To avoid civilian casualties we need very sophisticated equipment, so we need a few more precision fighter ground-attack aircraft for air-to-ground missions," he said. "I don’t have specific pledges or promises from this meeting, but I heard indications that gave me hope. …"

The Pentagon noted that Americans have flown 35 percent of all air missions over the last 10 days. Fogh Rasmussen said the alliance is keeping up "a high operational tempo," he added.  (photo: Getty)