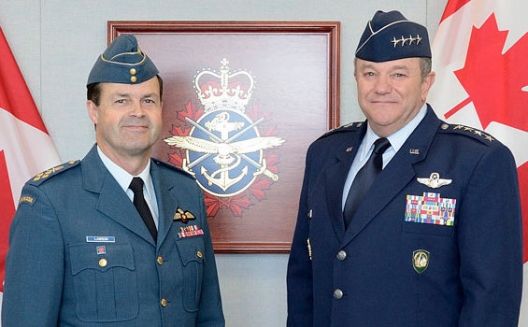 Russia’s annexation of Crimea and its “direct involvement in agitating the situation in eastern Ukraine” has created a “new paradigm” that is forcing NATO to consider permanently stationing military assets in Eastern Europe, NATO’s top military commander in Europe said Tuesday.

Speaking to reporters in Ottawa, U.S. General Philip Breedlove, NATO’s supreme allied commander for Europe, said he was tasked to set up “reassurance measures” for air, land and sea that will continue until Dec. 31. A mission extending beyond that would be possible but would be left to the discretion of NATO leaders and ministers of defence, he said.

Asked whether the Ukraine crisis could lead to the permanent basing of NATO troops in Eastern Europe, Breedlove said, “I think this is something that we have to consider, and we will tee this up for discussion through the leaderships of our nations and see where that lands. . . .”

Several times during the press conference, Breedlove referred to the creation of a “new paradigm” with regard to Russia’s actions in Ukraine.

“Based on the new paradigm that we see Russia has presented … we are all going to have to re-evaluate some of the decisions that we have made for structure, for positioning, for readiness, and … even more important in the short term, our force responsiveness will need to be re-evaluated,” he said.