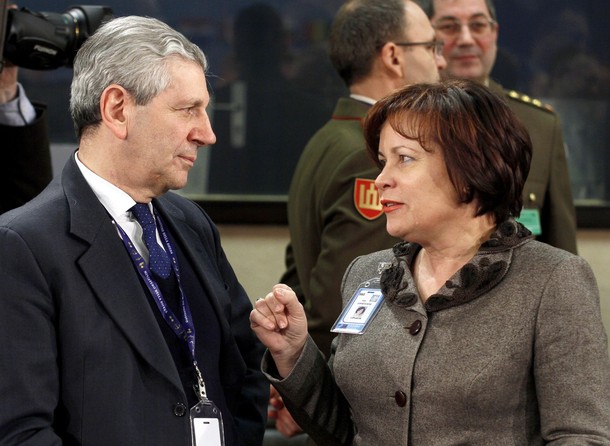 From the Ministry of Defense of Lithuania:  On February 2, Thursday, Lithuanian Minister of National Defence Rasa Juknevičienė while at the NATO Defence Ministers meeting in Brussels noted that a breakthrough had been achieved in the effort to have a prolonged Baltic Air policing mission in the Baltic States.

“A considerable attention was paid to the Air Policing mission in the today’s discussion on Smart Defence with the Ministers in the discussion with the Ministers. I am happy to know that the mission is considered as a perfect example of Smart Defence for NATO“, – the Lithuanian Minister said. According to R.Juknevičienė, it is very important that a long-term agreement had been achieved at the military level. “The Baltic States are committed to increase their contribution to the mission. It is very important to make appealing to our partners”, said the Minister.

According to the Minister, the following step before the Chicago Summit is to make an agreement regarding the future of the Air Policing mission at the political level.

In the meeting the Ministers supported the idea of Smart Defence and agreed that this mode of defence should not cause a decrease in defence financing. It was emphasized at the event that NATO continuously face a range of threats and challenges therefore Smart Defence is of great value to national forces of the member states. A declaration on Smart Defence is expected to be approved in Chicago. According to the Minister, it is a long-term direction that Lithuania has selected in realizing capabilities for the country’s and the Alliance’s security.  (photo: Reuters)