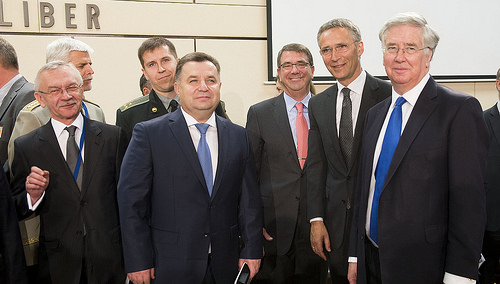 The North Atlantic Treaty Organization is developing a new strategy to speed decision-making and improve its response to the kind of unconventional warfare the West says Russia has used in Crimea and eastern Ukraine ….

Alliance officials believe any sort of overt invasion of Poland or the Baltic states by Russia is highly unlikely, but using more subtle means to weaken an allied government is a real threat.

A new hybrid warfare playbook would attempt to lay out the kind of assistance the alliance would provide should a member state come under outside pressure from Russia or another country. Such support could include sending cyber experts to help respond to computer hacking attacks, communication specialists to counter propaganda or even the deployment of NATO’s rapid reaction spearhead force….

“Hybrid warfare is a combination of many different kinds of activities,” said Czech Army Gen. Petr Pavel, the head of NATO’s military committee. “The primary purpose is to create an influence that is strong enough, but below the threshold of [collective defense provision] Article 5, so they achieve the goals without provoking the enemy or opponent to initiate a defense response….”

As part of the effort to develop the strategy, when alliance defense ministers gather in Belgium on Wednesday, they will review possible hybrid scenarios the alliance could face. The discussion is designed to hone their ability to make decisions quickly.

“This discussion is working on the political decision-making, so our senior-most leaders can understand the kinds of decisions they need to make, and that often those decisions have to be made with imperfect intelligence, ambiguous data,” said U.S. Air Force Gen. Philip Breedlove, NATO’s Supreme Allied Commander….

Adam Thomson, the U.K. ambassador to NATO, said since hybrid threats are designed to avoid provoking a response or slowing that response, showing the ability to make swift decisions is key.

“Part of deterrence could be decisions at the very early stage about putting forces on the notice to move. That sends a signal,” Mr. Thomson said.

On Friday, NATO Secretary General Jens Stoltenberg met with defense ministers from EU members to discuss the continuing work between the two organizations on hybrid threats. Mr. Stoltenberg said he sees “increased interest for cooperation between the European Union and NATO.”

The EU is working on developing a hotline with NATO to exchange information in the wake of a threat, an EU official said.

“We are not talking about joint efforts,” an EU official said in an email. “The objective is to establish close links that enable the two organizations to work together to prevent or respond to hybrid threats swiftly.”