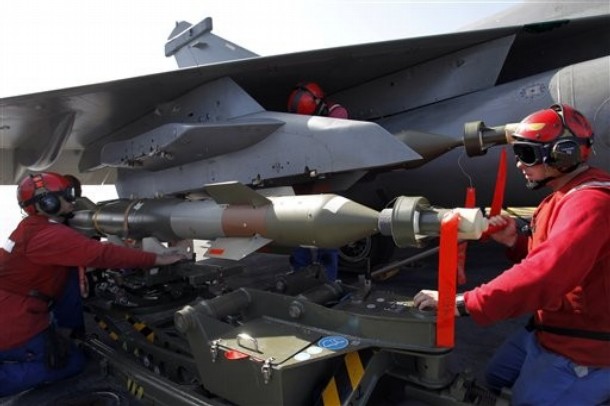 From Pierre Tran, DefenseNews:  Adm. Giampaolo Di Paola, the chairman of NATO’s military committee, denied that the air operation in Libya was running short of aircraft or munitions.

"Assets are important; the alliance welcomes any contributions, including strike assets, but there is no substantial lack," Di Paola said April 20. "Any added contribution is welcome, and there is no commander who does not ask. But beyond these alarmist rumors, there is no lack. The operation continues. . . ."

"There is no shortage," French Air Force spokesman Maj. Eric Trihoreau said April 19. "We can maintain this level without a limit on time."

The spokesman for the French Joint Staff, Army Col. Thierry Burkhard, also denied there was a lack of precision guided weapons. . . . .

A senior British air force officer also denied Britain has a problem with its munitions stocks. He said as far as he was aware, Denmark was the only nation that had had a problem and it had its stocks topped up by the U.S. military.

Micheal Langberg, the head of information at the Danish Air Force’s tactical command, said he didn’t know whether its munitions – GBU49s and GBU31s – were Danish or American, but the Air Force is "not short of weapons." The Danish Defence Acquisition & Logistics Organisation responsible for buying precision guided munitions and other weapons was not immediately available.  (photo: AP)