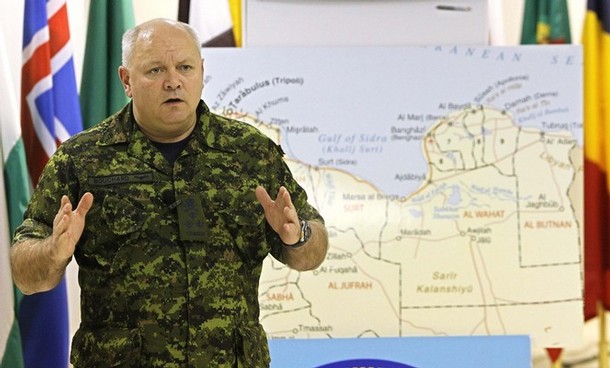 From Edward Cody and Simon Denyer, the Washington Post:  The commander of NATO operations in Libya said Tuesday that alliance bombers attacked a large government compound in Tripoli on Monday to destroy command and control nodes , and not to assassinate Libyan leader Moammar Gaddafi.

The assertion, by Lt. Gen. Charles Bouchard, the Canadian national who commands NATO’s Operation Unified Protector, was designed to refute accusations by Libyan officials that the aim of a strike early Monday was to assassinate Gaddafi in violation of international law.

“This is about command and control nodes and not about individuals,” Bouchard said in a briefing Tuesday streamed over the Internet in which he summed up the allied air campaign that began March 19. . . .

Bouchard said Tuesday, however, that the compound was essentially military. In addition to offices, the buildings contained communications gear, he said, that was used to transmit orders to loyalist Libyan forces to carry out immoral, indiscriminate and illegal military attacks on civilians in rebel-held areas such as the besieged city of Misurata.   (photo: Reuters)