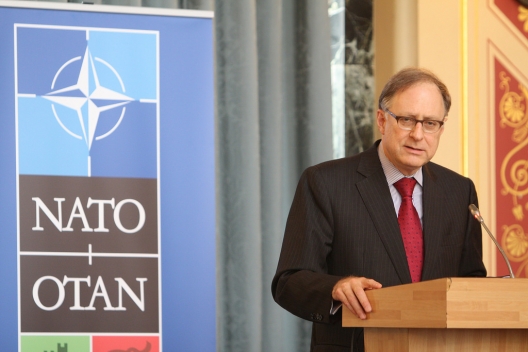 DW: While Turkey has reached out for NATO’s help in defending the country, Ankara has been criticized not only for its refusal to join the military coalition against the “Islamic State,” but also for allowing the country to become a sort of hub for IS fighters. Are you happy with the role Turkey plays to in the fight to counter the threat posed by IS?

AV: Turkey is an important ally living in a very tough neighborhood. I think they themselves recognize that the policy of zero problems with neighbors of a few years ago has not played out as optimistically as all of us would have hoped. My understanding is that Turkey is and does understand itself to be part of the coalition. It was present at the original meeting at the Wales summit. But the question now is what concrete contribution will Turkey make. It’s already making a big contribution – that’s extremely onerous – and that is hosting hundreds of thousands of refugees, a number that continues to rise. The coalition is not just about military action; it is also about mitigating the effects of the conflict that is now escalating with ISIL. . . .

DW: The crisis in the Middle East has overshadowed, at least for now, the situation in Ukraine, There is a fragile ceasefire is in place but the violence still continues on a lower level. Could the Ukraine crisis turn into a frozen conflict?

AV: I think that’s a serious danger right now, and I think that is what Russia is trying to do in eastern Ukraine. From our perspective at NATO, and I think this goes even beyond NATO to the EU, we are all insisting that Russia live up to every aspect of the Minsk agreement and not allow it to be implemented selectively. The ceasefire was supposed to freeze the conflict in place of positions since September 19. But of course the separatists with continuous Russian military support that is flowing across the uncontrolled international border have been escalating their attacks on the Donetsk airport.That is unacceptable. We need to see full implementation which includes Ukrainians getting the ability to control their own international border. Russia needs to make clear to the separatists that it does not support the elections that they are purporting to hold on November 9, which would have no legitimacy and are inconsistent with the Minsk protocol. It’s a very fluid situation. The ceasefire is not holding in some areas and there could be a serious deterioration in the coming days.