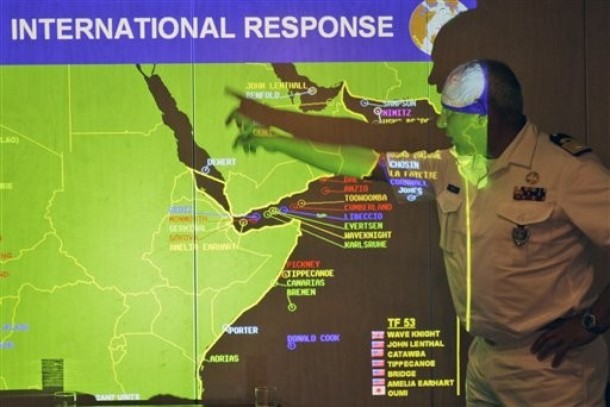 From Adam Schreck, the AP:  The commander of NATO’s counter-piracy flotilla said Wednesday that Somali pirates squeezed by a multinational armada in the Gulf of Aden may be shifting some operations to the southern Red Sea where naval forces lack clear authority to stop them.

In addition to one recent attack in the area, Commodore Michiel Hijmans said there have been "a lot of false alarms" where mariners believed pirates were pursuing them, including occasions where shots were fired.

"We are very cautious and we’re worried that there might be more attacks in that area," Hijmans said aboard the Dutch frigate De Zeven Provincien after it anchored in Dubai.

Foreign navies have U.N. Security Council approval to hunt pirates in Somalia’s territorial waters with advance notice using "all necessary means." But the Red Sea lies beyond that area of jurisdiction, creating a possible new front for pirates to operate. …

Pirates attacked the Marshall Islands-flagged MT Motivator on July 4 in the northern part of the Bab al-Mandeb Strait, which links the Red Sea to the Gulf of Aden. The chemical tanker was carrying lubricating oil and had a Filipino crew of 18.

Hijmans said that was the only confirmed attack so far in the southern Red Sea believed to be carried out by Somali pirates who may have traveled to the area under the cover of darkness.