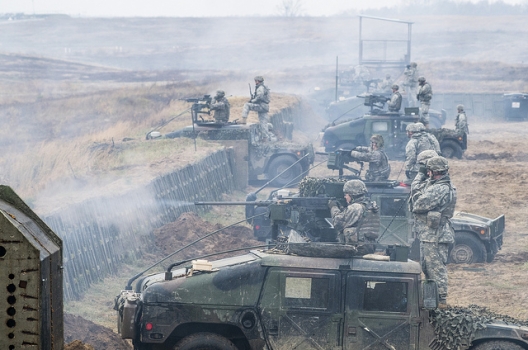 Here in Poland’s northern plains, one of Europe’s historic battlegrounds, the North Atlantic Treaty Organization is carrying out its biggest military exercise in seven years. Some 3,000 troops for 20 nations are taking part in the live-firing operation. . . .

NATO allies are looking toward new threats from cyberattacks and challenges to its southern flank posed by an unstable Middle East and North Africa. But at a time of fast-shrinking defense budgets, the exercise shows it is still under pressure to sustain a credible capability to defend the territory of any of its members who asks for help.

For NATO’s newer members from the former Soviet bloc, this commitment to mutual self-defense enshrined in Article 5 of NATO’s founding treaty remains central. Their reason: a continuing fear of Russia.

It is a position few NATO leaders are willing to proclaim publicly. “This is not about Russia. This is about us. This is about NATO, about our ability…to do this collective defense job,” said Gen. Breedlove in an interview with The Wall Street Journal and Reuters.

Volker Rühe, a former German defense minister, said the exercise provided comfort for Poland and the Baltic states by demonstrating “that Article 5 has some meaning, that the core business of NATO hasn’t changed.”

Observers from Russia and other countries, including China, attended demonstrations as part as newfound transparency among former adversaries.

But defending the territory of a member state against invasion is a step back to the past. “Fear of Russia is not going to be the glue of NATO in the 21st century,” said Mr. Rühe. . . .

NATO’s next big exercise, in 2015, which senior officers say may involve tens of thousands or more troops, will be focused on the Mediterranean. Gen. Breedlove said he hoped that one would “focus on more high-end, kinetic, collective-defense exercises.”