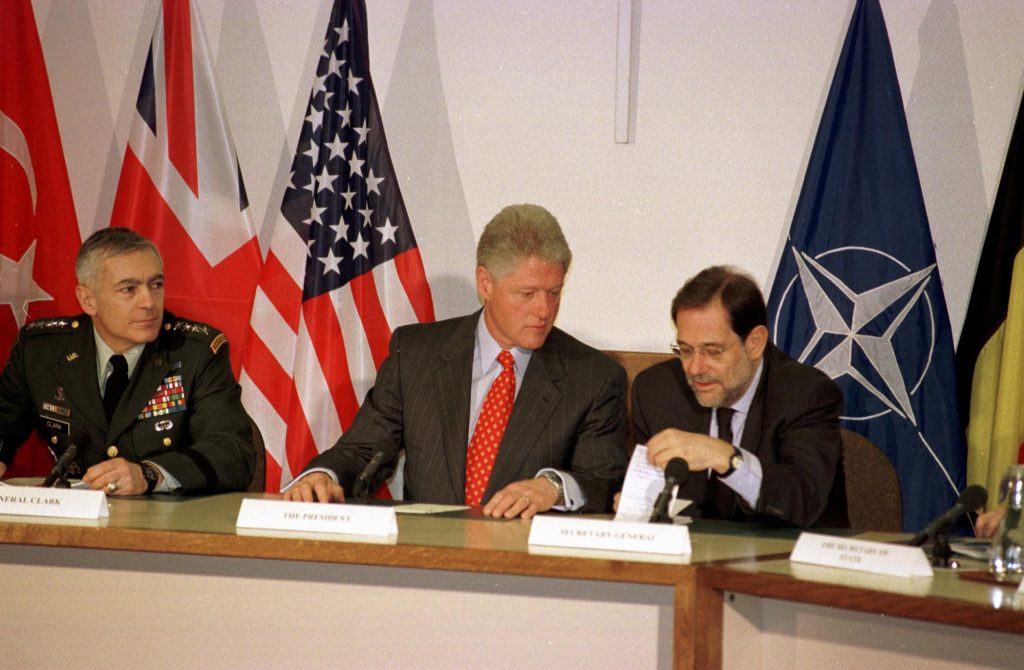 From Sean Kay, the Washington Note:  The Kosovo war is the best case in point to think about relative to the current crisis in Libya. The way NATO has been praised for its engagement seems to rest on a revisionist history of what happened in Kosovo. Of course, that was in 1999, but nothing really about NATO and the way it works – or doesn’t – has changed since then. In the Kosovo war, NATO could only agree to fly planes at 15,000 feet. NATO could not agree on a ground threat. NATO could only initially agree on a three day war campaign. All assumptions built around war by committee.

NATO did prevail in Kosovo – but not because of the air campaign or any major activity in Brussels. NATO won by agreeing to stay the course and had no major defections, which was a near all-consuming task for the White House at the time given stresses on key allies to remain in the coalition. But three months into the war, with no end in sight – it was weapons flowing to the Kosovo Liberation Army (KLA) that allowed them to smoke out Serb paramilitary forces making them vulnerable to air power combined with more aggressive strategic bombing. It was also the threat of a major ground invasion promulgated mainly by the British, along with seizing of assets of Serb leadership.

Most significantly, at the end of the day, it was Russian diplomacy that persuaded the Serbs to give in. Regime change came to Yugoslavia – but not because of the war – but because of economic isolation. In fact, during the bombing, nationalism ran high – an outcome that was warned about by the American intelligence community before the war began.

Another crucial lesson about Kosovo – and from its role in Afghanistan – is that while it works well at the tactical level of generating multinational forces and flexible headquarters, its command structures are highly convoluted and confusing. This, in a crisis, violates a fundamental premise of unity of command.

General Wesley Clark as SACEUR was frequently reminded during the Kosovo war that he took his orders from the Pentagon – which was resistant to much of his actions as he saw fit relative to NATO interests. When he tried to move material onto a runway to halt Russian planes landing in Pristina, a British General told him he refused to risk "World War III" and managed, by circumventing the chain of command, to get the orders changed. As one very senior American military official told me at the time, "they sent me to war with two hands tied behind my back."

The new Canadian General who will command this NATO operation will find very quickly that if he "implements" he will do well enough – if he tries to actually command, he will run into trouble. NATO’s mandate is clear – naval enforcement, no fly zones, and civil protection. Going beyond that risks the cohesion of the allies – which have already shown deep underlying differences. Cohesion of the allies thus becomes as important than achieving military outcomes on the ground. Just before the Kosovo war ended, US National Security Adviser Sandy Berger said that the US was prepared to win in Kosovo with, or without NATO.

As the war entered its final weeks, all major decisions were made by a quad of the US, Britain, France, and Germany (and sometimes Italy). To achieve success, NATO was circumvented. After the war, a senior allied official said that the primary lesson of the Kosovo experience was that we should "never do something like this again."

Sean Kay is a professor of politics and government at Ohio Wesleyan University and an Associate at the Mershon Center for International Security Studies at the Ohio State University.  (photo: NATO)