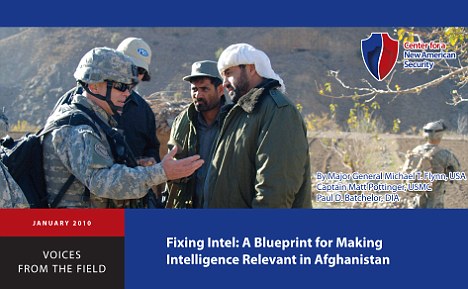 Army spokesman Col. Thomas Collins confirmed Flynn would be taking up a new post but would not specify it because the move has not yet been approved by the chairman of the Joint Chiefs of Staff.

However, two defense officials said Flynn would be promoted to lieutenant general and become a top troubleshooter for the new Director of National Intelligence, James Clapper. The officials spoke on condition of anonymity to discuss matters of intelligence.

Another U.S. official said the position Flynn is being considered for is assistant director for national intelligence for partner engagement. The official also spoke on condition of anonymity.

Flynn, who has held the post in Afghanistan since June 2009, is expected to be replaced by Brig. Gen. Stephen Fogarty, the current intelligence chief for the U.S. Central Command in Florida. …

During Flynn’s tenure here, he produced a controversial report entitled "Fixing Intelligence," which criticized the intelligence gathering structure in Afghanistan. In doing so, he went outside Defense channels to publish the report with the Center for a New American Security, a U.S. think tank.  (graphic: Daily Mail)