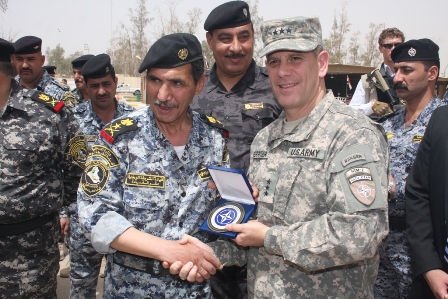 From NATOSource:  Italian Army Maj. Gen. Claudio Angelelli, deputy commander of NATO Training Mission Iraq (NTM-I), recently briefed SHAPE National Military Representatives and NATO’s Military Committee on extending the NTM-I in Iraq through the end of 2013. The extension of the training mission in Iraq will now be discussed by the North Atlantic Council (NAC) in NTM-I format on May 26.  If approved by the NAC, the renewal of the NTM-I will then be ultimately decided at the NATO Defense Ministers meeting, June 8-9.

From NATO:  The NATO Training Mission in Iraq (NTM-I) was established in 2004 at the request of the Iraqi Interim Government under the provisions of UN Security Council Resolution 1546. The aim of NTM-I is to assist in the development of Iraqi security forces training structures and institutions so that Iraq can build an effective and sustainable capability that address the needs of the nation.

NTM-I is not a combat mission but is a distinct mission, under the political control of NATO’s North Atlantic Council. Its operational emphasis is on training and mentoring. The activities of the mission are coordinated with Iraqi authorities and the US-led Deputy Commanding General Advising and Training (DCG (A&T)) who is also dual-hatted as the Commander of NTM-I. NATO has an enduring commitment to Iraq.  (photo: NTM-I)
International Organizations Politics & Diplomacy United Nations