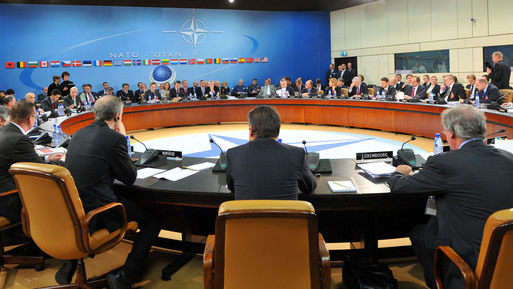 From NATO:  Since March 31st NATO and partner aircraft have been conducting an average of 150 sorties a day, all aimed at protecting Libyan civilians from the violence by Qadhafi regime forces. And since the beginning of the operations nearly 6,000 sorties have been conducted. Over 2,300 of them were strike missions on approved targets.

Every day we observe a changing situation on the ground, and we make adjustments to our operations to ensure that our effort has the maximum effect.

All NATO targets are military in nature and have been clearly linked to the Qadhafi regime’s systematic attacks on the Libyan population and populated areas.

Every strike conducted by NATO and partner forces is necessary, legal, moral and executed in a manner in which civilian casualties are minimized to the fullest possible extent.

Target sets have been chosen by the North Atlantic Council, the NAC, and they’re all engaged when strictly necessary to achieve the required strategic campaign effect.

All these targets, again, are directly linked to attacks or threats of attack against civilians and populated centres, and these targets have been engaged in the most professional way, using state-of-the-art precision-guided munitions. Well, are there challenges and complexities associated with this aspect of the missions? Absolutely, and let me tell you that NATO takes all the measures to ensure that our operations are conducted with the utmost precision and respect for the law.

Consider that at every level from the commander down to the aircraft crew targets are thorough analyzed, constantly assessed and carefully verified until the very last minute.

Our goal in planning and executing all operations is to minimize civilian casualties to the fullest possible extent. And I can say with the highest degree of confidence that the equipment and technology used by the NATO and partner aircraft and air crew are some of the most sophisticated and precise in the world. We use the most accurate systems and professional crew and we only use smart weapons. They are all precision-guided munitions with very excellent guidance systems.