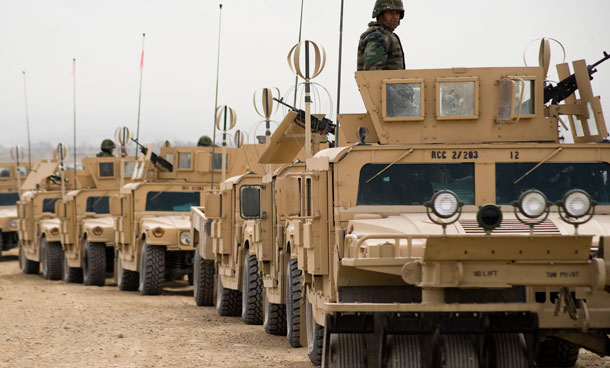 From Adrian Croft, Reuters:  NATO countries may temporarily send more troops to Afghanistan to pack up and ship out huge quantities of weapons and equipment as they wind down operations after more than a decade of war, a military planner said on Tuesday.

Lieutenant-Colonel Colin Richardson also said coalition members could use other routes to ship home their equipment even if the troubled crossing through Pakistan were closed to them.

With most foreign combat troops set to withdraw by the end of 2014, NATO must send home or dispose of 200,000 shipping containers and vehicles, said Richardson, a Canadian logistics expert at a NATO command in the Dutch town of Brunssum that supports the Afghan operation.

According to some estimates, more than $60 billion worth of equipment needs to be pulled out while soldiers continue operations against Taliban insurgents in a war that shows no sign of abating.

While the total number of foreign troops is falling as they gradually turn over security to Afghan forces, Richardson said the job of cleaning, packing and shipping equipment may lead some countries to send in more soldiers temporarily.

"Experience has shown us that for many of the troop-contributing nations, their troop levels will actually experience a slight increase as they bring in extra forces to prepare their equipment for redeployment," Richardson told reporters during a briefing at Brunssum. . . .

NATO members draw up their own plans for shipping out gear but the alliance coordinates them "to make sure they are not all trying to use the same routes at the same time", he said.   (photo: PO 2nd Class Ernesto Hernandez Fonte/ USN)