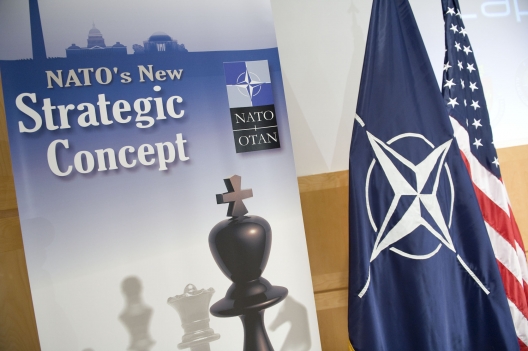 NATO is preparing for a long standoff with Russia, reluctantly accepting that the Ukraine conflict has fundamentally transformed Europe’s security landscape and that it may have to abandon hope of a constructive relationship with Moscow. …

The tension has prompted debate about whether it is time to rewrite NATO’s master strategy document, designed at a time when there were high hopes that the enmity of the Cold War years could be set aside and Russia and NATO could work together.

The “strategic concept”, adopted by NATO leaders at a Lisbon summit in 2010, rates the threat of a conventional attack on NATO territory as low.

The document, which sets out the alliance’s goals and missions, says NATO-Russia cooperation is of strategic importance and adds: “We want to see a true strategic partnership between NATO and Russia.”

“Some of the language (in the document) having to do with Russia as a strategic partner of the alliance is certainly cast into question given Russia’s behavior,” U.S. Ambassador to NATO Douglas Lute told reporters last month, though he said no decision had yet been taken to revise it….

The NATO diplomat, speaking on condition of anonymity, said there was little argument that the strategy document was out of date and would have to be rewritten “reasonably soon.”

The chill in relations with Russia would be lasting because Putin’s survival in power “is linked to permanent confrontation with the West,” the diplomat said.

But some allies, including Germany, are reluctant to change the strategy document now, partly because it would entail about a year’s work and partly because they do not want to antagonize Russia by closing the door on cooperation, or take any step that could undermine a truce agreement in Ukraine, the diplomat said….

Diplomats worry that rewriting the strategic concept could open a Pandora’s box, with some southern NATO allies, which think the alliance concentrates too much on security challenges from the east, wanting a greater focus on new threats from the south, such as the Islamic State group based in Syria and Iraq.

“It would stimulate a fundamental review of European security, of our approach to the south,” one NATO official, also speaking on condition of anonymity, said.

Removing the aspiration of a strategic partnership with Russia from the text would be “a big political step and maybe not necessary”, the official said.

NATO seems likely to opt for compromise. NATO leaders could order work on a revamp of the strategy document when they meet in Warsaw next July. It would then be ready for approval when they next meet, probably in 2018, diplomats said.