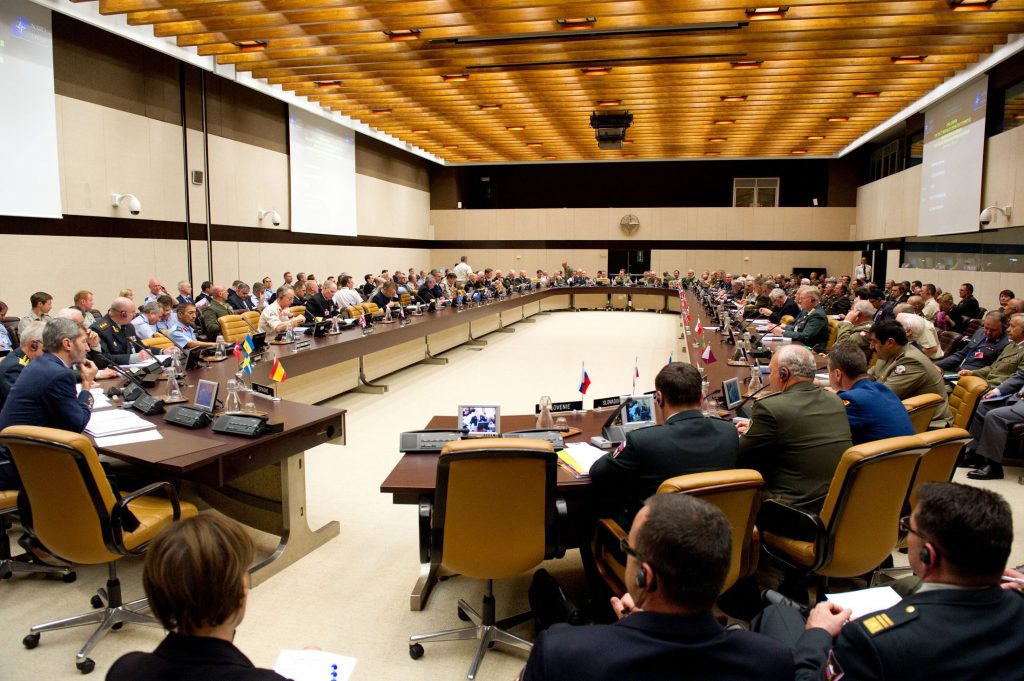 From NATO:  Chiefs of Defence (CHODs) from fifty-four NATO member and partner countries have concluded two days of meetings at NATO Headquarters. . . .

During the NATO Russia Council Military Representatives (NRC-MR) session, the CHODS assessed the progress of the 2011 Work Plan and provided direction and guidance for the 2012 Work Plan with a view to deepening and selectively widening the existing areas of cooperation. An important step in military cooperation was marked by the co-signing of the NATO-Russia Council Consolidated Glossary of Cooperation by Admiral Di Paola and General Makarov – the Russian Chief of Defence. This product represents over ten years of detailed research, compilation and translation and will further NATO-Russia cooperation for the future.

The first day ended with a session on Operation Unified Protector (OUP) in Libya. Admiral Stavridis, together with the Commander Joint Forces Command Naples (JFCN), Admiral Samuel J. Locklear III, updated the CHODs on progress made since the beginning of the military action. Taking stock of the successful programmed degradation of the pro-Qadhafi forces ability to launch and sustain attacks on the civilian population, NATO and Partner Chiefs of Defence agreed on the need to keep up the pressure until the goals agreed upon in the Berlin Foreign Ministerial are achieved.

The second day focused principally on Afghanistan. SACEUR, COMISAF, General Petraeus, together with the Afghan Chief of Defence, General Karimi and Ambassador Simon Gass, NATO Senior Civilian Representative, briefed the NATO and NATO Partner CHODS on the achievements since the Lisbon Summit and on the progress of Transition. While there is clearly improvement – in quality and quantity – of the Afghan National Security Forces (ANSF), the effort by the Nations in supporting the NATO Training Mission needs to be increased and sustained in order for Afghans forces to take on a growing ownership in delivering security. The CHODS re-confirmed their full commitment the ISAF operation.  (photo: NATO)