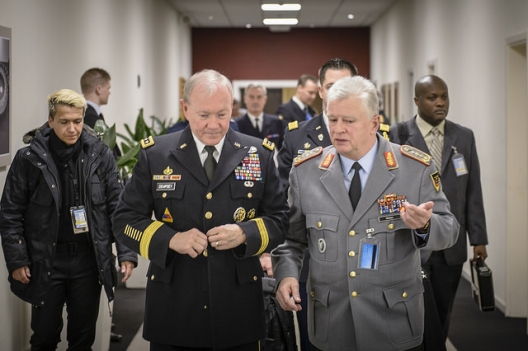 NATO is focused on strategies to deal with its two biggest threats — Russian aggression to its east, and the threat of terrorism from its south, the chairman of the Joint Chiefs of Staff said today.

Russian aggression, Dempsey said, has “changed sovereign borders with the use of coercion.” And the recent terrorist attacks in Paris underscore the “very real threat of terrorism that comes up into NATO’s southern flank.”

There was consensus among the military chiefs that NATO must confront these threats, he said.

NATO Needs to Address Both Threats

“I thought this would be the most important meeting of its kind that I’ve had with NATO since I’ve been chairman, and in my judgment it proved to be just that,” the chairman said in an interview on his plane back to Washington.

“We came to an agreement that NATO really does have to address both threats, and that NATO has the capability and the resources to address them both,” Dempsey said. “We don’t have to pick which threat is more serious.”

While Dempsey declined to discuss details of the most recent allegations of Russia violating September’s Minsk ceasefire agreement, he did underscore the seriousness in which NATO views the Russian aggression.

“It is indicative of efforts on the part of Russia to support separatists in, frankly, violation of Ukrainian sovereignty,” Dempsey said. “We’re very concerned about it.”