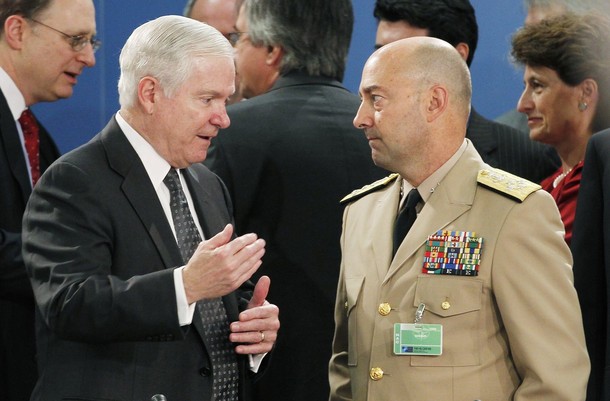 From Karen DeYoung, the Washington Post:  NATO military officials began briefing governments Tuesday night on a range of options that will be presented to defense ministers in Brussels on Thursday.

The Obama administration, NATO and other international organizations are united in their belief that any military intervention in Libya would require some international backing. But with a U.N. mandate far from assured, those considering some form of intervention – including the United States, Britain, France and Italy – are looking for alternative support, officials said.

"If you have [support from] the Arab League, the African Union, NATO and potentially the European Union, you have every country within 5,000 miles of Libya," a NATO official said. "That gives you a certain level of legitimacy. …"

In NATO, Germany has said it does not support a no-fly zone. NATO operates by consensus, and an operation would not be approved if any member chose to speak out against it.

In conversations this week with his U.S. and British counterparts, Italian Foreign Minister Franco Frattini said Italy would make its air bases available for no-fly operations if they were supported by NATO, the E.U. and the Arab League, another European diplomat said. …

The Arab, European and African organizations have each scheduled separate meetings on the Libyan crisis this week, along with Thursday’s NATO gathering. "We need some signal from the region that the action was welcome," one of the European diplomats said. …

NATO maintained a no-fly zone over the disputed province of Kosovo for three years, while numerous atrocities occurred below, before sending its bombers to Serbia. In Libya, an imminent humanitarian catastrophe would be the best legal basis, short of a U.N. resolution, for a no-fly zone or other intervention, U.S. and European officials said. But such judgments are inherently subjective, said one official.

"This is the question," he said. "How many people being killed constitutes sufficient grounds?"  (photo: Reuters)