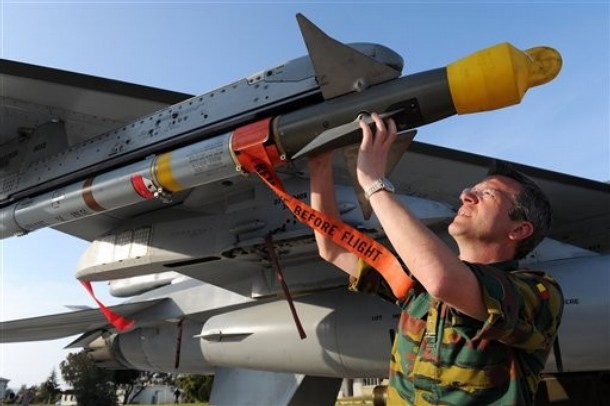 From Steven Erlanger, the New York Times:  Angry charges by Libyan rebels that NATO has failed to come to their aid point up a question that has haunted the Western air campaign from the start: how to avoid a stalemate and defeat the Libyan leader without putting foreign troops on the ground. …

“The military capabilities available to Qaddafi remain quite substantial,” said a senior Pentagon official who watches Libya. “What this shows is that you cannot guarantee tipping the balance of ground operations only with bombs and missiles from the air.”

NATO officials, who just took over responsibility for the air campaign from the United States, deny that their bureaucracy is somehow limiting the air campaign. “No country is vetoing this target or that one, it’s not like Kosovo,” where in 1999 some countries objected to certain bombing targets, said a senior NATO official, asking anonymity in accordance with diplomatic practice.. “The military command is doing what it wants to do,” he said.

NATO officials said on Wednesday that NATO is flying more missions every day, and that defending Misurata is a priority. Carmen Romero, a NATO spokeswoman, said that the alliance flew 137 missions on Monday, 186 on Tuesday and planned 198 on Wednesday. "We have a clear mandate and we will do everything to protect the citizens of Misurata.”

Indeed, a rebel spokesman in Misurata said Wednesday that NATO had delivered two air strikes that pushed the Qaddafi forces away from the port, opening it for vital supply ships. “We have renewed momentum and our friends are helping us big time,” said Mohamed, a rebel spokesman whose name was withheld for the protection of his family.  (photo: AP)