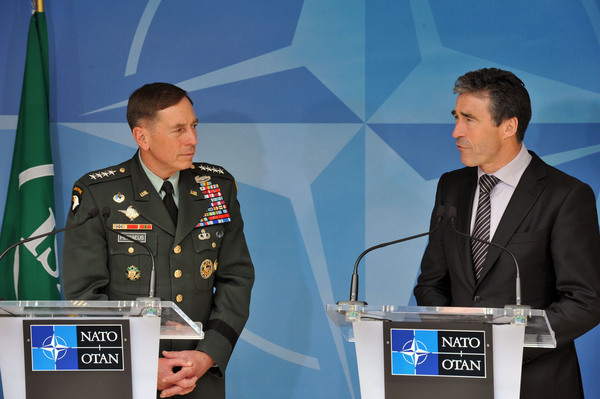 From Marc Tran and Jon Boone, the Guardian:  Plans to begin handing control of provinces to Afghan security forces by the end of this year have been quietly dropped amid fears among European countries that Petraeus is less committed to a speedy transfer of power.

The change of tack, revealed in the final communique from yesterday’s historic international conference in Kabul, reflects Petraeus’s concerns that security conditions in Afghanistan are too weak for a transition of power to begin as quickly as originally planned, a Nato official told the Guardian. …

Beneath the diplomatic niceties, it became clear that plans first agreed by Nato ministers at a meeting in Estonia in April had been quietly dropped.

Nato had hoped that, by the end of this year, a cluster of neighbouring provinces in the north-west of the country would have begun the handover to the Afghan army and police force.

But in the final agreement of the conference, a reference to transition taking place on a "province by province" basis, which appeared in an earlier draft, had been removed.

A Nato official said the change reflected Petraeus’s wish to slow the pace of the transfer of power.

European powers had wanted to announce which provinces would be handed over at a summit of foreign ministers in Lisbon in November.

The official said: "For Petraeus, Lisbon is not a problem. His main concern is the US political timetable, and being able by next summer to show progress that won’t unravel."

According to the official, the slowing of the timetable sparked a heated exchange between Petraeus and Anders Fogh Rasmussen, the Nato secretary general, during a video conference last week.

Speaking before this week’s conference, a senior European diplomat said Petraeus’s approach was far less welcome than that of his predecessor, Stanley McChrystal.

"Petraeus is trying to slow everything down, pushing back any announcement of transition until 2011," the diplomat said.

Sources close to both men said there had been tense talks in the last week, culminating in an acrimonious video conference between Kabul and Brussels where the two men laid their disagreements bare.

Mr Rasmussen, the former Danish prime minister, wants the safest provinces to be "transitioned" within the next few months – ahead of a Nato summit in Lisbon, scheduled for November 20. Sources close to General Petraeus said the American commander, who assumed command in Kabul three weeks ago when his predecessor was fired, wants to wait until summer 2011. …

Sources familiar with the split say it stems from a divergent reading of the security situation, a different understanding of the Afghan army’s strength – and very different political pressures on the two men. "It’s as if (Rasmussen’s] people have been getting him to believe we are further on than we are," said a military source in Kabul.

"He expects us to be much closer to transition than we are. …"

A civilian strategist said Mr Rasmussen was eager to honour an agreement from the last Nato summit, in Estonia in April, where the coalition ministers agreed to start transition by the end of 2010. "They were supposed to announce the first tranche of places handed over to Afghan security control in time for the Lisbon summit," said an official. "That’s not going to happen. Petraeus doesn’t care about Lisbon."

General Petraeus, on the other hand, wants to link transition to the planned military draw down in July 2011, the source said.

Staff at his headquarters said he was more concerned about the Congressional hearings on Afghanistan in December, and an Afghanistan review in January 2011.  (photo: NATO)