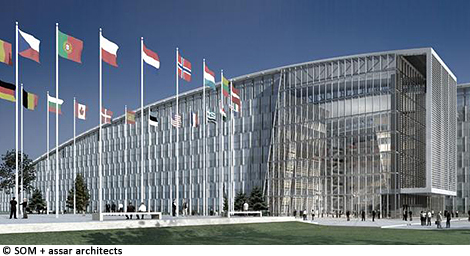 Forty-six years after the North Atlantic Treaty Organization moved into these “temporary” headquarters on the outskirts of the Belgian capital, the alliance is still here.

For decades, the rambling low-rise buildings formed the backdrop of the alliance’s Cold War machinations against its longtime adversary, the Soviet Union. Now, the alliance is waging a less dramatic battle—keeping the buildings in shape until it moves into its €730 million ($972 million) headquarters, with its swooping arcs of steel and glass, across the road in 2016.

Built in eight months in 1967—after French President Charles de Gaulle ousted non-French NATO troops from French soil and the organization left Paris—the structures were described by one early occupant as “really quite repellent public-housing style buildings.” Spread over 70 acres, they were supposed to be the alliance’s home for five years.

Unlovely to start with, when 15 member states moved in, the buildings have become even more so as NATO has expanded to its current 28-country roster. Since 1999, when Poland, Hungary and the Czech Republic joined, the offices have been extended using prefabricated cabins, many placed on former parking lots. Other countries that partner with NATO forces around the world, like Ukraine and Georgia, have offices here too.

Many at NATO believe, erroneously, that the facilities were built as a hospital, even a mental hospital. When the organization moved here that chilly October from elegant offices at Porte Dauphine on the edge of the Bois de Boulogne, NATO staffers dubbed their new home, on the site of a former World War II Luftwaffe air base, “Little Siberia.”

The sentiment persists. “I’ll miss the people,” said Ivo Daalder, who concluded his term as U.S. ambassador to NATO in July. “Not my beautiful view of the parking lot and the Ukrainian delegation.”

In 2004, the alliance discovered toxic asbestos in the main buildingand had to get rid of it.

Maintenance crews—led by Matthew Klimow, a former U.S. army colonel and diplomat whose job it will be to shift the organization and 4,000 people to its new headquarters, and Robert Grumberg, a U.S. Army Reserve captain who is the chief building engineer—talk about the place as a doting parent would a homely child.