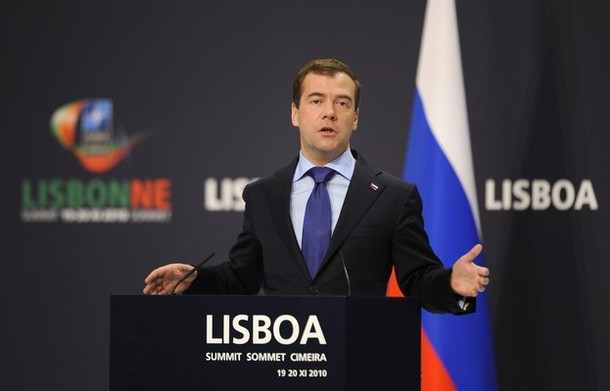 From Stephen Fidler and Gregory L. White, the Wall Street Journal:  Leaders of the North Atlantic Treaty Organization have rebuffed a proposal from Russian President Dmitry Medvedev to unite Russia’s missile defenses with those of the West, said diplomats and NATO officials.

At a closed-door meeting with NATO leaders in Lisbon Saturday, Mr. Medvedev suggested uniting a missile shield being built by the 28 allies with Russia’s own missile defense system.

People attending the summit said President Barack Obama and other leaders diplomatically rejected the Russian leader’s proposal, saying the issue should be looked at by the countries’ technical experts. The experts will look at ways the two systems can cooperate and report to a meeting of NATO and Russian defense ministers in Brussels in June.

NATO diplomats said the Medvedev proposal goes way beyond what the alliance envisages, which is cooperation and information sharing between two systems rather than a single system. "We’re looking at two different systems linked up," said a NATO spokeswoman.

Mr. Medvedev’s told a news conference afterward that his proposal was for "sectoral missile defense." Russian officials later said Mr. Medvedev proposed that Russia and NATO countries would be responsible for shooting down missiles flying over their own territories and Russia would destroy missiles headed for NATO territory.

Dmitry Rogozin, Russia’s ambassador to NATO, said in an interview with the Russian website Vzglyad that Mr. Medvedev’s proposal "goes much further than NATO’s fantasies" of limited cooperation.

"Medvedev is effectively proposing to create a collective missile-defense system along the perimeter of the Euro-Atlantic region. It roughly amounts to agreeing not to keep missile-defense systems inside the region—something that raises our suspicions—and arrange for the system to be pointed outwards."

The proposal would mean the NATO system’s sensors wouldn’t be pointed toward Russia, which is sensitive that the system could blunt its own nuclear deterrent.  (photo: Getty)