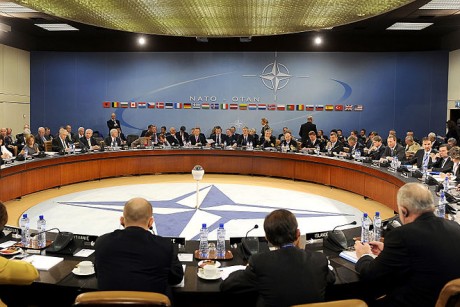 From Serkan Demirtaş, Hurriyet Daily News:  NATO rejected Turkey’s request for the adoption of a contingency plan to include the establishment a no-fly zone over Syrian airspace , which was made during a meeting last week in Brussels after Turkey invoked Article Four of the NATO Treaty in response to Syria’s downing of a Turkish jet in international airspace.

“NATO members did not give a green light to Turkey’s plan. No one in the alliance seems to be ready for a military engagement in this part of the world,” a Western diplomatic source told the Hürriyet Daily News Thursday.

Turkey brought its proposal to the table at a meeting June 26 where it invoked Article 4 of the treaty, after Syria downed its RF4-E jet, allegedly in international airspace. . . .

“To establish a no-fly zone requires a large number of jets in combat-ready status and of course one has to be ready to accept losses. The Syrian anti-aircraft artillery and surface-to-air missiles are quite successful,” another Western diplomat said. A new process began June 30 after the Geneva meeting with the participation of Russia, the diplomat said, adding that “After Geneva, there will be no U.N. Security Council resolution and of course no no-fly zones. It’s not the time to show muscles in that area.”

“It is true that we have proposed a contingency plan,” a Turkish diplomatic source said yesterday. “Work to draft a contingency plan with NATO has begun at the [office] of the SACEUR [Supreme Allied Commander].”  (photo: Michael Skinner Research)