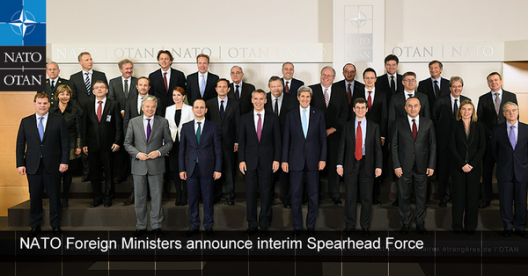 At the NATO Wales Summit in September 2014, Allied leaders approved a Readiness Action Plan to ensure the Alliance is ready to respond swiftly and firmly to new security challenges. The plan provides a comprehensive package of measures to respond to the changes in the security environment in and near Europe. It responds to the challenges posed by Russia. It also responds to threats emanating from the Middle East and North Africa.

“The Readiness Action Plan is the biggest reinforcement of our collective defence since the end of the Cold War. And it is my top priority to implement this plan in full and on time.”
– NATO Secretary General Jens Stoltenberg, 20 November 2014

As set out in the Wales Summit Declaration, assurance measures include the “continuous air, land, and maritime presence and military activity in the eastern part of the Alliance… on a rotational basis”.  All 28 Allies contribute to the effort. The measures can be scaled up or down depending on the security situation.

As part of the Assurance Measure NATO has:

• Increased from four to eighteen the number of fighter jets on air-policing patrols over the Baltics. Canada, Germany, the Netherlands and Portugal currently provide the planes.
• Commenced AWACS surveillance flights over Poland and Romania.
• Sent more ships on patrol to the Baltic Sea, the Black Sea and the Mediterranean.
• Deployed ground troops to the eastern parts of the Alliance for training and exercises, on a rotational basis.
• Conducted over 200 NATO and national exercises in Europe so far this year. Major exercises included: Black Eagle in Poland (20 Oct-5 Dec: 2,000 British and Polish troops), Steadfast Javelin I in Estonia (16-23 May: 6,000 troops from nine Allied countries), Steadfast Javelin II in the Baltics, Germany and Poland (2-8 Sept: 2,000 troops from ten Allied countries), Iron Sword in Lithuania (2-14 November: 2,280 troops from nine Allied countries).
• Several Allies have also sent ground and air forces to Eastern Europe for training and exercises on a bilateral basis. For example, the United States has deployed troops from the US Army’s 1st Brigade Combat Team, 1st Cavalry Division to Estonia, Latvia, Lithuania and Poland with tanks, mechanized vehicles, and other heavy military equipment.

Adaptation measures will enhance NATO’s military posture and readiness levels. They include:

• Enhancing the NATO Response Force (NRF) to make it more responsive and capable. Its land component will be restructured to consist of a number of force packages of land, air and see forces which can move at short notice in order to rapidly respond to threats. Taken together, the NRF land forces could constitute up to a division size force.
• As part of restructuring the NRF, the creation of a new quick reaction “Spearhead Force” (Very High Readiness Joint Task Force) of several thousand ground troops supported by air, maritime and special forces, able to deploy within a few days. NATO is working to stand up the new force in early 2016.
• Enhancing NATO’s Standing Naval Forces with more ships and more types of ships.
• The establishment of a multinational NATO command and control presence and reception facilities on the territories of the eastern Allies (Bulgaria, Estonia, Latvia, Lithuania, Poland, Romania) at all times, with personnel from Allies on a rotational basis, focusing on planning and exercising collective defence.
• Raising the readiness and capabilities of the Headquarters Multinational Corps Northeast in Szczecin in Poland and enhancing its role as a hub for regional cooperation.
• The pre-positioning of military equipment and supplies.
• The improvement of NATO’s ability to reinforce its eastern Allies through preparation of national infrastructure, such as airfields and ports.
• Updating defence plans for Eastern Europe.
• More exercises focussed both on crisis management and collective defence.