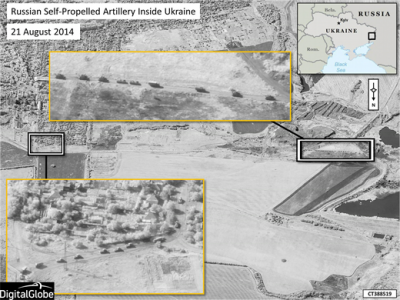 NATO released new satellite images on Thursday, 28 August 2014, that show Russian combat forces engaged in military operations inside the sovereign territory of Ukraine. The images, captured in late August, depict Russian self-propelled artillery units moving in a convoy through the Ukrainian countryside and then preparing for action by establishing firing positions in the area of Krasnodon, Ukraine.

Dutch Brigadier General Nico Tak, director of the Comprehensive Crisis and Operations Management Centre (CCOMC), Allied Command Operations said the images confirmed what NATO and its Allies had been seeing for weeks from other sources.

“Over the past two weeks we have noted a significant escalation in both the level and sophistication of Russia’s military interference in Ukraine,” said Brigadier General Tak. “The satellite images released today provide additional evidence that Russian combat soldiers, equipped with sophisticated heavy weaponry, are operating inside Ukraine’s sovereign territory,” he said.

These latest images provide concrete examples of Russian activity inside Ukraine, but are only the tip of the iceberg in terms of the overall scope of Russian troop and weapons movements.

“We have also detected large quantities of advanced weapons, including air defence systems, artillery, tanks, and armoured personnel carriers being transferred to separatist forces in Eastern Ukraine,” said Brigadier General Tak. “The presence of these weapons along with substantial numbers of Russian combat troops inside Ukraine make the situation increasingly grave,” he said. . . .

The source of the images is an independent firm named Digital Globe. The images have not been altered or changed by NATO. Additional information has been added to identify locations, dates and equipment. DigitalGlobe images can be independently verified: http://www.digitalglobe.com.