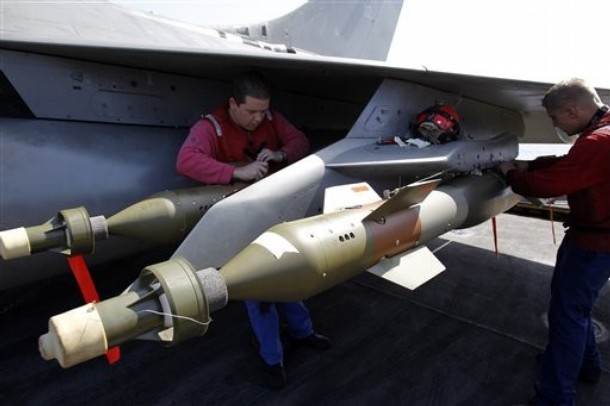 From Karen DeYoung and Greg Jaffe, the Washington Post:  Less than a month into the Libyan conflict, NATO is running short of precision bombs , highlighting the limitations of Britain, France and other European countries in sustaining even a relatively small military action over an extended period of time, according to senior NATO and U.S. officials.

The shortage of European munitions, along with the limited number of aircraft available, has raised doubts among some officials about whether the United States can continue to avoid returning to the air campaign if Libyan leader Moammar Gaddafi hangs on to power for several more months. …

But, they said, the current bombing rate by the participating nations is not sustainable. “The reason we need more capability isn’t because we aren’t hitting what we see — it’s so that we can sustain the ability to do so. One problem is flight time, the other is munitions,” said another official, one of several who were not authorized to discuss the issue on the record.

European arsenals of laser-guided bombs, the NATO weapon of choice in the Libyan campaign, have been quickly depleted, officials said. Although the United States has significant stockpiles, its munitions do not fit on the British- and French-made planes that have flown the bulk of the missions. …

Concerns that supplies of jet-launched precision bombs are growing short in Europe have reignited long-standing controversies over both burden-sharing and compatibility within NATO. While allied jets have largely followed the U.S. lead and converted to precision munitions over the last decade, they have struggled to keep pace, according to senior U.S. military officials.

Libya “has not been a very big war. If [the Europeans] would run out of these munitions this early in such a small operation, you have to wonder what kind of war they were planning on fighting,” said John Pike, director of GlobalSecurity.org, a defense think tank. “Maybe they were just planning on using their air force for air shows."  (photo: AP)