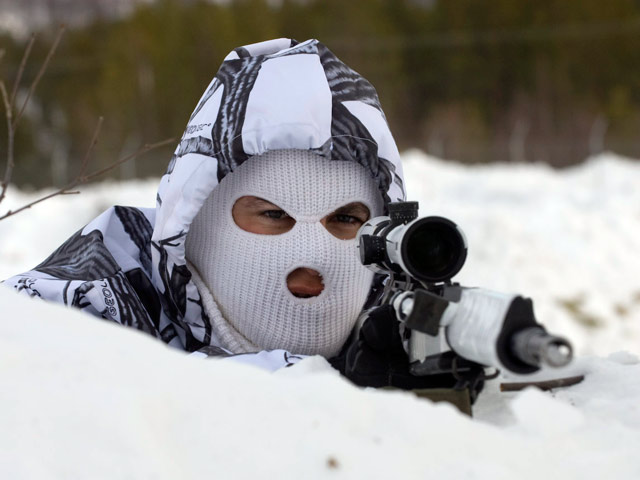 From Ilya Kramnik, the Voice of Russia:  In March, NATO wrapped up its Cold Response maneuvers on the stretch from Sweden to Canada, with 16,300 troops engaged in this unprecedented military exercise. The war game was only clouded by a crash, when a Norwegian C-130J plane rammed into the western slope of the Swedish mountain, Kebnekaise, killing five servicemen.

The Russian military kept apace, staging their own maneuvers. Its 200th motor rifle brigade from Murmansk tested the T-80 tanks, which are believed to be best-suited for the Arctic climate, with their gas turbine engines, which are much easier to start in the cold weather than the traditional diesel ones. The Russian Northern Fleet, as well as Air Defense planes, choppers and marine aviation participated in the drills.

The Air Forces also trained in Russia’s northern reaches. On April 9-15, Russia staged Ladoga 2012 maneuvers at the Karelian Besovets air base with 50 choppers and aircraft, which engaged and shot down over 150 air targets. . . .

If the Arctic emerges as another junction of sea lanes it will spawn conflicts among the world powers, depending on how determined they will be to protect their national interests.

Russia is one of such ambitious northern powers, currently planning on boosting its Arctic infrastructure, for instance building twenty frontier posts to protect its polar reaches. Some of them will be erected close to nine emergency and transport ministerial centers, set up to further the development of Russia’s Northern Sea Route. The rest of the frontiers will be built on the islands. A satellite system called Arktika will allow for their uninterrupted communication with the "mainland."

These frontier posts, which are to be erected in the upcoming years, will serve as Russia’s bulwark beyond the Arctic Circle and will be secured by its Northern Fleet, air forces and the so-called “Arctic brigades,” specially trained to operate in the polar region.  (photo: French Ministry of Defense)