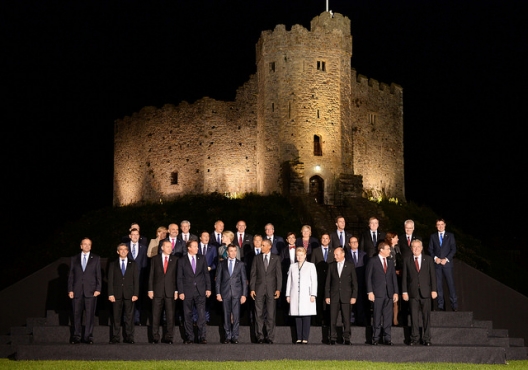 We warned last year (The Way to Avoid Wars: Article 5 and Strategic Reassurance Revisited) that any move by Russian forces into Eastern Ukraine would be highly destabilizing and have unpredictable results – probably including NATO countries providing logistical and intelligence support to Ukraine’s military, possibly going beyond that.

That is what has happened and that is where we are today, with the risk of direct confrontation between NATO and Russian forces greater now than at any time since the end of the Cold War. The situation is exacerbated by the growing appreciation that Russia has engaged in hybrid warfare against Ukraine and that such tactics could also be used against NATO countries. How should NATO respond?

A fundamental shift in strategy is required, recognizing that Russia is no longer a country we can rely on not to attack NATO members. Russia has become a potential threat to our territorial integrity which must once again be deterred.

There is no obligation for NATO to intervene in the conflict in Ukraine because Ukraine is not a member of the Alliance. Nevertheless, there are important issues at stake for NATO.

The first is respect for international law, which underpins international security. Whatever we may think of President Putin’s declaration that Russia will use all available means, including intervention under international humanitarian law, to defend the rights of Russian-speakers living abroad, we must reject and excoriate any interpretation of such policy to justify sending forces in disguise to support rebellions abroad and annex territory. If Russia believes it has the right to intervene in Ukraine under international humanitarian law, it should explain its case publicly – including the urgent humanitarian catastrophe it seeks to avert and why there is no alternative to its action – and be transparent about its actions. It should not act by stealth and revert to the “big lie”, denying that its forces are engaged, denying that its missile units shot down Malaysian airliner MH17, pretending to be the peacemaker when the reality is the opposite.

The second important issue for NATO is its formal commitment under the 1997 NATO-Ukraine Charter “to support Ukrainian sovereignty and independence, territorial integrity, democratic development, economic prosperity and … the principle of inviolability of frontiers, as key factors of stability and security in Central and Eastern Europe and in the continent as a whole.” Although this stops well short of requiring specific actions by NATO, it does require NATO to react politically when Ukraine is attacked. For the NATO states who signed the 1994 Budapest Memorandum giving security assurances to Ukraine as a condition of its renunciation of its nuclear weapons, that requirement is underlined.

The third and most important issue for NATO is that, because of the commitments it has made to uphold peace and security in its region and specifically to support Ukraine’s territorial integrity, its credibility is now at stake. If NATO does not react effectively against Russia’s disguised hybrid warfare attack on Ukraine, deterrence in Europe will be weakened, making it more likely that the territory of NATO members will be attacked.

To respond effectively, NATO must face up to this challenge and draw on everything it has learned about how to counter aggression, while avoiding being drawn into direct conflict.

Specifically:
1) NATO nations must strengthen their support for Ukraine by imposing further political, diplomatic and economic sanctions against Russia, and by supplying military equipment, training and intelligence to Ukraine, as well as economic and humanitarian support to those affected by the fighting. They should also help the Ukrainian authorities strengthen and demonstrate their attention to the concerns of their Russian-speaking citizens.

2) NATO must increase its efforts in public diplomacy to demonstrate Russia’s culpability for the conflict and to counter Russian propaganda. Russia must be labelled the aggressor and not allowed to pose as peacemaker.

3) NATO must urgently increase its readiness to conduct and sustain a major military operation in Eastern Europe should any of its members come under attack.

For NATO itself, the last is the most important. If we wish to deter any attack against NATO members, including hybrid warfare, we must demonstrate our determination, capability and readiness to do so.

While NATO’s recent announcement that it will establish six new command posts on its eastern borders and create a 5,000-strong rapid reaction force is welcome and goes in the right direction, it is not enough. To convince President Putin that any attack on NATO will be counter-productive for him, we must thoroughly transform NATO’s outlook and put it on a more immediate operational footing.

Russia needs to perceive that in the event of an attack against any NATO state, including a disguised hybrid attack, NATO will reinforce the Ally attacked with substantial conventional forces which it will be able to sustain indefinitely, that it will do so promptly regardless of whether the attack’s authorship is acknowledged, that there will be other repercussions including economic and political, and that NATO’s response will not necessarily be symmetrical or confined to direct defense of the Ally attacked.

To achieve this, NATO should immediately refocus its planning so as to be able to mount and sustain a major operation in Eastern Europe at a few weeks’ notice, supported by appropriate information operations, and it should urgently review operational sustainability against this background in consultation with industry. NATO defense planners should pinpoint key short-term deficiencies in C4ISR, interoperability and transport logistics which should be corrected or worked around. Allies should review and update their plans to deploy their forces together. The Secretary General and SACEUR should report on what additional flexibilities they need to redeploy resources. The NATO military authorities should develop appropriate retaliatory contingency plans. Manpower shortages and weapons stockpile vulnerabilities should be addressed.

Some will argue that steps such as these will be inflammatory and increase the risk of confrontation with Russia. On the contrary, NATO must mean business or go out of business. If we give the impression through lack of capability and readiness that we do not mean what we say when we promise to defend each other, we risk inviting potential aggressors to call our bluff with catastrophic results. Deterrence cannot be bluff; unsupported security commitments are the worst form of blunder.

Looked at with the benefit of hindsight, President Putin’s policy towards what he terms Russia’s “near abroad” appears consistent. He claims a sphere of influence for Russia and the right to protect Russian “compatriots” in the “Russian world” against their state authorities, unconstrained by law. These two assertions fit neatly together but are in conflict with the principles of the United Nations and the OSCE and of international law more generally.

In 2008 in Georgia, Russia’s actions were partially excused on the grounds that a pre-existing conflict had erupted. NATO’s reaction was muted. In 2014 in Crimea, no such confusion existed: overwhelming force was used to ram through annexation of territory. NATO’s reaction was less muted but not effective. In 2015 in Eastern Ukraine, Russia is on the verge of another land grab. This time NATO must react decisively.

To misquote Oscar Wilde, to overlook one aggression may be regarded as a misfortune, to ignore two looks like carelessness, not to respond appropriately to a third would be stupidity.

Edgar Buckley is a former NATO Assistant Secretary General for Defence Planning and Operations and now an independent consultant. Ioan Pascu is Vice President of the European Parliament and former defence minister of Romania.