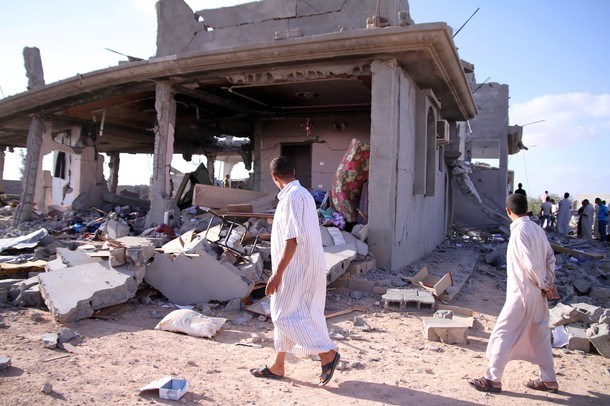 From the Editors of the New York Times:  Tragic mistakes all too often accompany combat operations, even when the military objectives are humanitarian. That is what seems to have happened in the Libyan farming village of Majer last August. Amid the confusion of a rebel advance and a retreat by Qaddafi loyalists, successive NATO bomb runs there killed at least 34 Libyan civilians, including women and small children, according to journalists, human rights organizations and United Nations investigators. . . .

NATO planners made extraordinary efforts to minimize civilian casualties. Fighter jets relied exclusively on smart bombs, which are guided by laser or satellite, to pinpoint intended targets. Bombing guidelines excluded legitimate military sites if hitting them also endangered civilians. But smart bombs are no more accurate than the intelligence used to program them and pilots flying at high speeds can only avoid civilians they know about. Most of the targets struck in Libya were not pre-planned, but chosen in flight on the basis of imperfect information.

Implausibly, NATO insists it knows of no “confirmed” civilian casualties during its entire seven-month Libya bombing campaign. “Confirmed,” as our colleague C. J. Chivers pointed out in Sunday’s Times, means confirmed by NATO, which has shown little interest in investigating credible independent claims of civilian fatalities, including a 27-page memo submitted by The Times last year documenting nine separate attacks where the evidence pointed to unintended victims.  (photo: Getty)