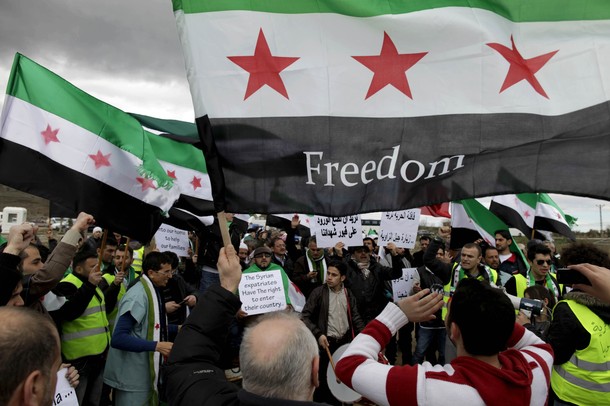 From John D. Podesta and Ken Gude, the Khaleej Times:  Today, the growing debate about a Syrian intervention raises legitimate questions concerning whether Libya was a unique situation. Libya’s proximity to Europe both lowered barriers to participation and stimulated Europe’s sense of responsibility. Moreover, many European countries have direct interests in Libya, and thus had a clear stake in the outcome. Libyans’ opposition to Gaddafi was relatively well organised, was recognised by the international community, and had explicitly called for outside intervention.

While the conditions in Libya were certainly optimal, the situation in Syria is better described as uniquely complicated for any intervention. For starters, Syria’s location in the Eastern Mediterranean is not as advantageous as is Libya’s position in North Africa. Syria’s borders with Turkey, Iraq, Lebanon, and Israel also present unique challenges to regional security, given the potential not only for international conflict, but also for destabilising cross-border flows of refugees. Syria also has allies — most importantly Russia, with its veto-wielding seat on the United Nations Security Council.

The significant obstacles to intervention, and the genuine risk of making an already terrible situation worse, makes direct military intervention in Syria a remote possibility at this time. That is tragic in many ways, but it does not mean that the positive post-Libya momentum towards the protection of civilians is entirely lost. . . .

For Nato, that leverage depends upon its members’ ability to marshal the will and resources to intervene if necessary. In Libya, Europe finally had the will to lead, but it lacked the means, and still relied heavily on the US. Even though the US was not the first to call for military action, its participation in the mission was essential and confirmed its status as the one indispensable nation in the Western alliance. . . .

In addition to its air-strike deficiencies, Europe demonstrated serious shortfalls across all of the areas required to sustain any air campaign. As General Mark Welsh, Commander of US Air Forces in Europe, told top officers and industry executives at a gathering last summer, “We need more intelligence, surveillance, and reconnaissance capability, and we need it now. . . .”

The transatlantic alliance has reached a fork in the road. Down the path less traveled lies greater coordination on both strategic objectives and development of military capacity, particularly within Europe, where governments must better allocate resources among themselves in order to overcome the key deficiencies revealed by the Libya mission. The more familiar road leads to wasteful overlap and lower investment in key technologies, leaving wider gaps than ever in Europe’s defence capability.

If Europe is to build on its success in Libya, it needs to take the road less traveled. It will make all the difference.