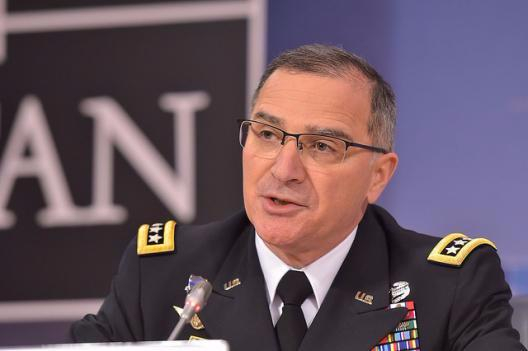 [T]oday we face the most dynamic European security environment in history.  Political volatility and economic uncertainty are compounded by threats to our security system that are trans-regional, multi-domain, and multi-functional.  In the East, a resurgent Russia has turned from partner to antagonist.  Countries along Russia’s periphery, especially Ukraine and Georgia, are under threat from Moscow’s malign influence and military aggression.   In the Southeast, strategic drivers of instability converge on key allies, especially Turkey, which has to simultaneously manage Russia, terrorists, and refugee flows.  In the South, violent extremists and transnational criminal elements spawn terror and corruption from North Africa to the Middle East, while refugees and migrants fleeing persecution to Europe in search of security and opportunity.  In the High North, Russia is reasserting its military prowess and positioning itself for strategic advantage in the Arctic….

With the approval of former Secretary Carter, EUCOM delivered the first new operational plan for the defense of Europe in over 25 years.…

Russia is taking steps to influence the internal politics of European countries just as it tried to do in the United States in an attempt to create disunity and weakness within Europe and undermine the transatlantic relationship. Furthermore, Russia has repeatedly violated international agreements and treaties that underpin European peace and stability, including the Treaty on Intermediate-Range Nuclear Forces (INF) and the Treaty on Conventional Armed Forces in Europe (CFE), and it is undermining transparency and confidence building regimes such as the Vienna Document and Open Skies, which provides greater transparency of posture and exercises in the region Russia’s political leadership appears to seek a resurgence through modernization of its military.  Russia is adjusting its doctrine, modernizing its weapons, reorganizing the disposition of its forces, professionalizing its armed services, and upgrading capabilities in all warfighting domains. Russia desires a military force capable of achieving its strategic objectives and increasing its power….

Most concerning, however, is Moscow’s substantial inventory of non-strategic nuclear weapons in the EUCOM AOR and its troubling doctrine that calls on the potential use of these weapons to escalate its way out of a failing conflict. Russia’s fielding of a conventional/nuclear dual-capable system that is prohibited under the INF Treaty creates a mismatch in escalatory options with the West. In the context of Putin’s highly centralized decision-making structure, Moscow’s provocative rhetoric and nuclear threats increase the likelihood of misunderstanding and miscalculation….

In the Balkans, Russia exploits ethnic tensions to slow progress on European and transatlantic integration.  In 2016, Russia overtly interfered in the political processes of both Bosnia-Herzegovina and Montenegro….

Violent extremists, most notably ISIS, pose a serious, immediate threat to U.S. personnel, our allies, and our infrastructure in Europe and worldwide.  In 2016, there were major terrorist attacks in Berlin, Brussels, Istanbul, Nice, Paris, and elsewhere.  ISIS has made its intentions clear:  it seeks to overthrow Western civilization and establish a world-wide caliphate.

While it’s footprint in Iraq and Syria shrunk in 2016, since 2014, ISIS has significantly expanded its operations throughout Europe and now leverages its network to enable and inspire attacks by European-based extremists in their resident countries.  Further, ISIS has exploited the migration crisis to infiltrate operatives into Europe.  Since Turkey expanded its counter-ISIS role and advocacy for coalition operations in Mosul, it has experienced an increased number of terrorist attacks, and ISIS’s leaders have called for more.  We do not expect the threat to diminish in the near future.

As a consequence of this threat, European nations have been forced to divert financial resources and military personnel to internal security.  The impact of this reallocation is not yet fully appreciated and will likely persist for years.  In short, violent extremism poses a dangerous threat to transatlantic nations and to the international order that we value….

As the United States manages multiple strategic challenges, our enduring strength remains NATO, the most successful alliance in history.  NATO’s leadership understands that the security environment has radically changed over the past few years.  The Alliance has placed renewed emphasis on deterring further Russian aggression, countering transnational threats, such as violent extremist organizations, and projecting stability in the Middle East and North Africa, while fulfilling its commitments in Afghanistan.

The Warsaw Summit last July was a significant demonstration of unity, cooperation, and strategic adaptation.  As the member nations declared in NATO’s Warsaw Summit Communiqué, “We are united in our commitment to the Washington Treaty, the purposes and principles of the Charter of the United Nations (UN), and the vital transatlantic bond”.  This unity is NATO’s center of gravity, and the United States must continue to support solidarity among the Alliance nations….

Critical ally and partner capability shortfalls remain, including strategic lift; intelligence, surveillance, and reconnaissance (ISR); deployable command and control; air to air refueling; and air and missile defense.  Further, both EUCOM and NATO are hampered by inadequate infrastructure that affects the ability to maneuver across the continent.  The expansion of the Alliance to include former Eastern Bloc countries has exacerbated the lack of common transportation networks between the newer NATO members in the east and the more established allies in the west.  EUCOM is working closely with NATO to identify and address infrastructure requirements to improve U.S. and NATO freedom of movement throughout the theater.