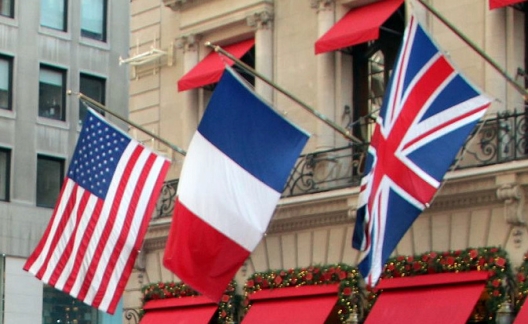 At the strategic level, informal trilateral consultations among top U.S., British, and French policymakers and military officials are nothing new. But last summer’s spate of mutual recriminations, involving their respective “red lines” and readiness to launch military strikes against Syria, shows there’s room for improvement regarding crisis response. Emerging threats need greater attention, too. For example, as nuclear weapons states, the three allies should be discussing how to improve the resiliency of space assets and cyber systems that are critical for effective deterrence against potential adversaries.

Trilateral consultations should be buttressed by deeper military cooperation. The 2011 Libyan intervention demonstrated that close, multilevel ties among the U.S., British, and French air forces can produce decisive operational advantages. The three navies work together well in the Mediterranean, Arabian Gulf, and off the coast of Somalia. But they could do more to ensure their interoperability for maritime security missions in the Indian Ocean and Gulf of Guinea, where potential threats come from terrorists and pirates. The three armies (especially their Special Operations forces) face growing demands to train African peacekeeping and counterterrorism forces, so improved coordination and role specialization makes sense.

Logically, trilateral cooperation should complement the 2010 Lancaster House treaties, under which Paris and London launched an ambitious bilateral program to create a muscular Combined Joint Expeditionary Force, share certain nuclear weapons-related laboratories, and improve defense industrial collaboration in future air-combat systems and anti-ship missiles. If successful, Lancaster House will set a powerful example for other Europeans to follow. This should be a “win-win” from a U.S. perspective.

However, U.S. clearance procedures for certain classified materials reportedly are hindering information sharing between British and French staff officers, slowing implementation of key Lancaster House initiatives. It’s a sensitive area, but as President Barack Obama stated in his January 17 remarks on signals intelligence: “Heads of state and government with whom we work closely, and on whose cooperation we depend, should feel confident that we are treating them as real partners.” A meeting of the three defense ministers and other top national security officials may be necessary to come to grips with these issues and craft a practical approach. . . .

True, France, at times, can be a difficult partner. Yet its policies, capabilities, and operational commitments will play an important role in shaping those of other Europeans. Strengthening America’s “entente pragmatique” with our oldest ally can strengthen the transatlantic alliance as a whole.

James Stavridis is a retired 4-star Navy admiral who serves today as the 12th Dean of The Fletcher School of Law and Diplomacy at Tufts University. Leo Michel is a Distinguished Research Fellow at the National Defense University.