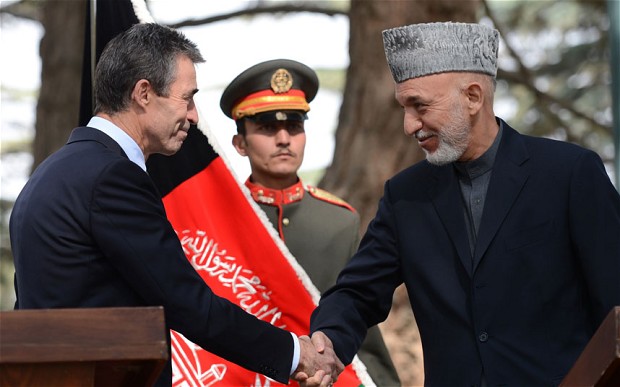 From Anders Fogh Rasmussen, Telegraph:  I have just returned from Afghanistan, having seen real progress which too rarely receives the attention it merits. We have a clear plan to put Afghans in charge of their own security by the end of 2014. That is what the Afghans themselves want, and what we agreed with our partners in the International Security Assistance Force (Isaf) at Nato’s Lisbon summit in 2010. We are sticking with that plan because it is working.

Together with the North Atlantic Council – Nato’s political decision-making body – and seven partner nations, we visited Afghanistan to demonstrate our commitment to the mission, reaffirm our strategy and timetable, and reassure the Afghan people of our continued support after 2014.

We saw service men and women from the 50 Isaf nations doing a superb job. We saw Afghan security forces that are growing more capable and more confident. During the first six months of this year, Afghans led over 80 per cent of all operations, and they are currently conducting 85 per cent of their own training. . . .

In the course of 2013, the Afghans will have the lead for security throughout their country. By the end of 2014, they will have full responsibility for security across Afghanistan. Our Isaf mission will then be complete. But our commitment to the people of Afghanistan will continue. We are already preparing to lead a new mission from 2015 onwards. It will not be a combat mission, but focus on training, advising and assisting the Afghan security forces. . . .

A key step towards a better future will be the 2014 presidential elections, which must be inclusive, transparent and credible. This is a point we stressed throughout our visit.

To build on our gains, we must all keep the pledges we have made. This mutual commitment is driving Afghanistan’s progress from state failure to stability and success. In 2001, Afghanistan was a haven for the terrorist conspiracy that produced the attacks of 9/11. Now it is recovering its place in the global family of sovereign nations. In the process, the Afghan government and people have accepted responsibilities that they must meet. I believe that they will rise to this challenge.

We have a once-in-a-generation opportunity to break the cycle of violence and extremism in Afghanistan, to build long-term security for the Afghans, the wider region and ourselves. We have the plan to do so. We stand by our plan.