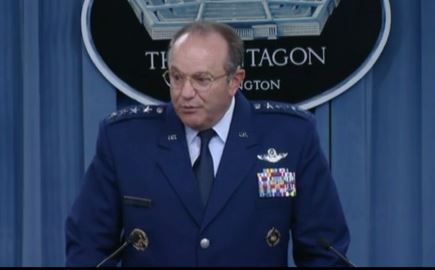 Russia is irresponsibly stepping up its nuclear rhetoric in a bid to rattle the west, Nato’s military chief has said, underlining the alliance’s concern about Russian threats to deploy nuclear weapons in Crimea.

Warning that nuclear nations had to to be careful in both actions and words, Gen Philip Breedlove said Moscow was deliberately using threatening language in a bid to “give pause to Nato’s decision-making.”

“This discussion of nukes and the possibility of moving nukes into certain areas or employing nukes if something had not gone correctly in Crimea and all these other things, which have been put out there — this is not responsible language from a nuclear nation,” he said at meeting of Nato foreign ministers in Antalya, Turkey.

Nato diplomats have been struck by Russia’s aggressive discussion of the use of nuclear weapons, noting a pattern of threats that were rarely seen even at the height of the Cold War. It is prompting a potential rethink of the military alliance’s planning on deterrence and nuclear doctrine, in part to ensure no miscalculations are made in a crisis.

Gen Breedlove’s comments were reinforced in a Nato joint statement with Ukraine, which said the foreign ministers were “deeply concerned by statements of the Russian leadership with regard to possible future stationing of nuclear weapons and their delivery systems in Crimea, which would be destabilising“.