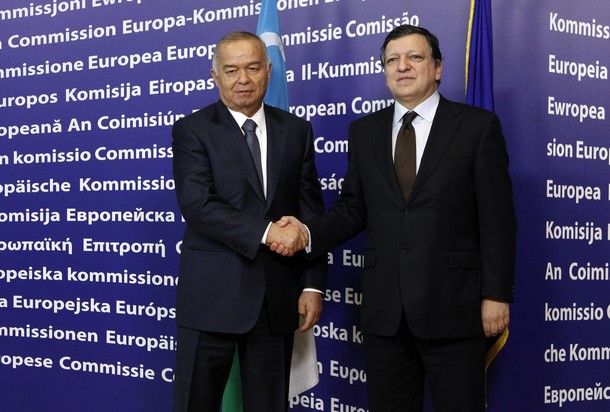 Q: David Brunnstrom from Reuters. Secretary General, I wanted to ask about Uzbekistan. There’s been considerable controversy about the visit to Brussels of the leader of Uzbekistan. Could you clarify who extended the invitation? Did NATO invite him here, and could you explain why it is so important for NATO to have a dialogue with Uzbekistan, despite the controversy over human rights?

Anders Fogh Rasmussen: I’ll have a meeting with the Uzbek president later this afternoon. It’s a meeting decided on request of the president of Uzbekistan. I find it quite natural to have this meeting. Uzbekistan is one of our partner countries and within our partnerships we have a continuous dialogue with our partners, including a dialogue on democracy and human rights and that will also be one of the topics for discussion this afternoon.

So these are the reasons why I’m going to have a meeting with the Uzbek president this afternoon. …

Q: Martinez de Rituerto with El País. Good afternoon. Coming back to President Karimov’s visit to NATO, you have explained the reasons, but at the same time the public opinion that will be listening, reading about your reasons will be thinking that you are saying hello and receiving here to a president that has been qualified precisely this moment, this morning by the Human Rights Watch, as one of the worst human rights offenders in the world.

So you are receiving one of the worst human rights offenders in the world at the same time that you are asking to the public opinion to support the fight of NATO in Afghanistan to support democracy. So there is no contradiction between these two? Thank you.

Anders Fogh Rasmussen: Let me stress that it is a very important part of our partnership programs to have a dialogue with our partners on human rights, democratic principles and broader reforms of societies. And this is the reason why these issues will also be subject to discussion in the meeting this afternoon with the Uzbek president.

But let me repeat there are two reasons why I have accepted the request for a meeting.

Firstly, that Uzbekistan is a partner and like other partners we are, of course, prepared to meet, to continue this dialogue. And secondly, and the second reason is that actually we share interests in seeing progress in Afghanistan. And to that end we have a transit facility through Uzbekistan which plays an important role for our operation in Afghanistan and honestly speaking, I keep in mind the interest of our soldiers in Afghanistan. We owe it to them that we do our utmost to ensure that we can provide necessary equipment for their daily operations in Afghanistan. So I think, based on experience, that it is will be possible for me to strike the right balance, to discuss human rights and democracy and at the same time, practical cooperation on transit facilities and other elements in practical cooperation that can be to the benefit of our operations in Afghanistan.  (photo: Reuters)