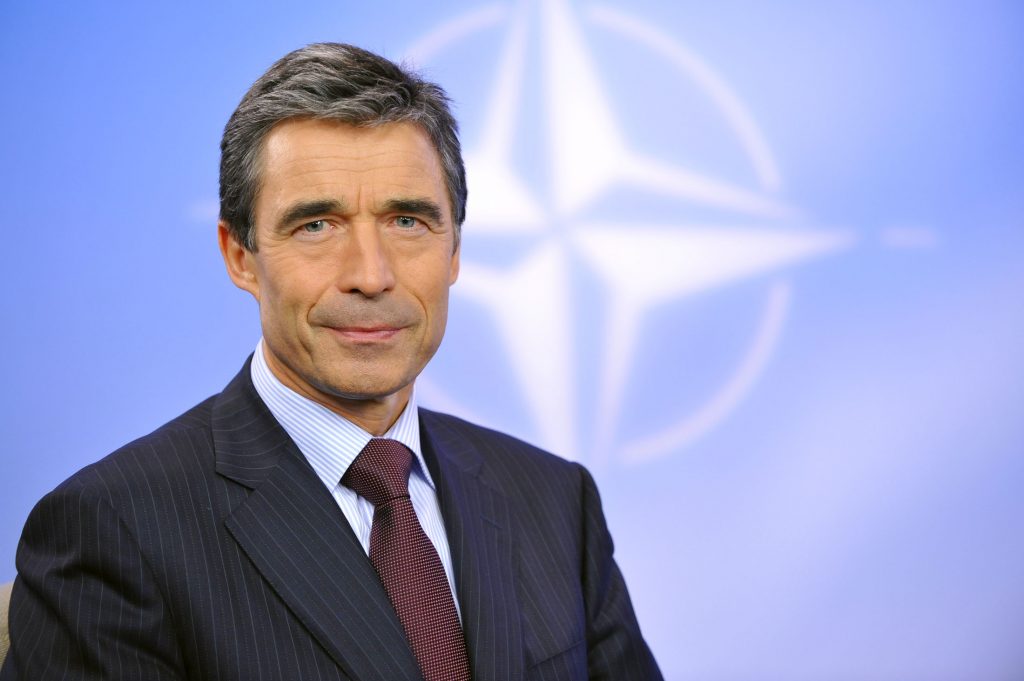 From Anders Fogh Rasmussen, NATO:  As I’m here as Secretary General of NATO, please allow me to use this occasion to express my deep gratitude to everyone in the American armed forces. In particular, here in Illinois, I would like to pay tribute today to the members of the Illinois National Guard. The brave men and women of the United States’ military serve their country with honour and distinction. Many have served, or are currently serving, in NATO operations. They have made a tremendous sacrifice not only for your security, but for security in Europe too. And they are not alone. Many thousands of service personnel from other NATO countries have fought with them, shoulder-to-shoulder, in Afghanistan, Bosnia, Kosovo, and over Libya.

In particular, I would like to pay homage to the memory of one Illinois soldier, Sergeant Andrew Tobin. Sergeant Tobin was laid to rest in September of last year in Jacksonville. His mother has started a not-for-profit organization, called “Member of Service Moms”, that seeks to honour his legacy and the legacy of soldiers like him. I extend to her my deepest condolences on her loss. I commend her selfless efforts. And I wish her the very best. . . .

[S]ometimes, when we talk about the ‘bond’ between North America and Europe, we speak in abstract terms that seem far from reality. But the transatlantic bond is not abstract at all. It is real. And personal.

It is founded on relationships and values cherished by both our continents. And it is based not on shared threats, but on shared history, shared ideals, and shared interests. Initiatives such as the International Visitor Leadership Program play a vitally important part in emphasising what we have in common, and in keeping our two continents closely connected. . . .

The generation that fought the war is nearly gone. Their memories of that terrible conflict, and their determination to avoid another like it, were the pillars on which NATO was built and kept strong for over 60 years. As long as these memories are alive, I know that the Alliance’s role will remain unquestioned.

My generation remembers their stories, and the lessons they taught us. But we must ensure that future generations too will know why NATO was founded, and how truly important its role still is. In an age when we face so many unpredictable and complex threats, we cannot allow what Lincoln called the ‘silent artillery of time’ to undermine the most successful Alliance in history.

When I visit my friends in Washington, I sometimes hear sceptical voices questioning NATO’s value. But we must resist the temptation to measure NATO’s value in terms of dollars or Euros. Because our security is priceless. The defence of freedom can never come for free; and it is crucial that democracies in Europe and North America stand together in the defence of our common values – individual liberty, democracy and the rule of law.

Only by acting together, can we preserve the freedom and the prosperity that we have enjoyed for more than 60 years for our children and grandchildren. . . .

I began by paying homage to the memory of a young soldier laid to rest here in Illinois, Sergeant Andrew Tobin. So it is only fitting that I end by paying similar homage to another soldier, a young man from Denmark named Jacob Olsen.

He died a week after Sergeant Tobin. Also in Afghanistan. He had been in the Danish army for just over a year. And he had been in Afghanistan for just over a month. Like Sergeant Tobin, he left behind a mother – a mother who wanted to ensure that something good came from his sacrifice. She wrote a poem to mark the anniversary of his death. Let me read you the first two lines.

“You fought to your end,
And you fought for us all.”

I can think of no better way to describe what Andrew Tobin, Jacob Olsen, and so many others have done. They gave everything they could for us – to preserve our freedom and our way of life.

Just like the soldiers who stormed the Normandy beaches on D-Day. Like the sentries who protected the check-points in Berlin against Warsaw Pact aggression. Like the pilots who stopped mass murder in the Balkans, and who protected civilians from a vicious dictator in Libya.

The bond between Europe and the United States was forged by conflict. It was consecrated by the sacrifice of fallen soldiers. And it was strengthened by our solidarity in wars – both cold and hot. Today, it is our service men and women who embody and reaffirm this bond every day, around the world.

It falls to us to preserve this bond for tomorrow. Because although it was built in the past, it holds a promise for the future. It is the same promise that brought immigrants from around the world to Illinois – to till its fields, to run its factories, to play music in its jazz clubs, and to reap the bountiful harvest of prosperity and peace.

It is the promise that all our peoples shall enjoy freedom, democracy, and security for generations to come.