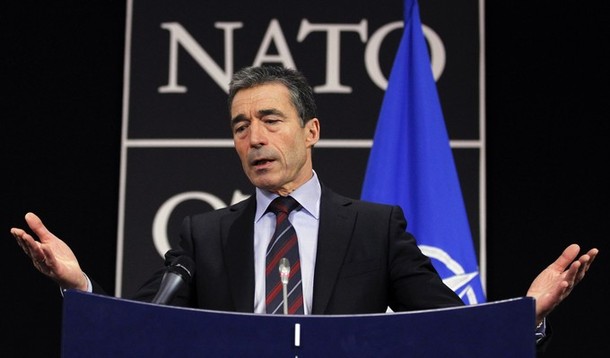 From Anders Fogh Rasmussen, NATO:  The whole world is watching events in Libya and the wider Middle East. Many of our Allies have been evacuating their nationals and helping other people in need.   This is a humanitarian crisis on our door-step that concerns us all.  The civilian population in Libya is the target of systematic attacks by the regime.   So we must remain vigilant.

We strongly condemn the use of force against the Libyan people. The violation of human rights and international humanitarian law is outrageous.

As stated by the UN Security Council, these widespread and systematic attacks against the civilian population may amount to crimes against humanity.

The Libyan authorities have a responsibility to protect the population; they should fulfil the legitimate demands of the Libyan people; and allow a peaceful transition to democracy.

Later this week, on Thursday and Friday, NATO defence Ministers will meet. The situation in Libya and the region will be top of the agenda.

Let me be clear. NATO has no intention to intervene in Libya. But as a defence Alliance and a security organisation, our job is to conduct prudent planning for any eventuality. We assume that an operational role would be in accordance with and pursuant to a UN Security Council mandate. …

Defence ministers will discuss the situation in Libya, but also the longer term prospects for the region. They will consider how NATO can do more to help our partners in North Africa and the wider Middle East during this period of transition, if they so wish.

From Slobodan Lekic, the AP:  “If these systematic attacks against the Libyan people continue, it may amount to crimes against humanity. Then, many people around the world would be tempted to do something to prevent this massacre,” NATO’s Secretary-General Anders Fogh Rasmussen said. …

“If (Moammar) Gadhafi and his army continue to attack the Libyan population indiscriminately, I can’t imagine that the U.N. and international community will stand idly by,” he told reporters.  (photo: Reuters)