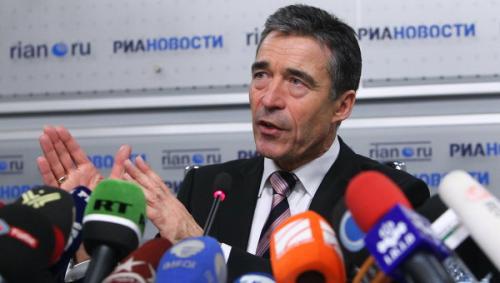 From Anders Fogh Rasmussen, NATO:  I do not consider the situation in Libya a direct threat to NATO or NATO Allies, but, of course, there may be negative repercussions.

Such upheaval may have a negative impact on migration, refugees, etc., and that also goes for neighbouring countries.

But I would like to stress that NATO as such has no plans to intervene. We have not received any request in that regard and any actions should be based on a UN mandate.

Rasmussen is Secretary General of NATO. This statement was made  in response to a question asked by Reuters at a  press conference in Kiev, during the Secretary General’s visit to Ukraine.   (photo: Ruslan Krivobok/RIA Novosti)