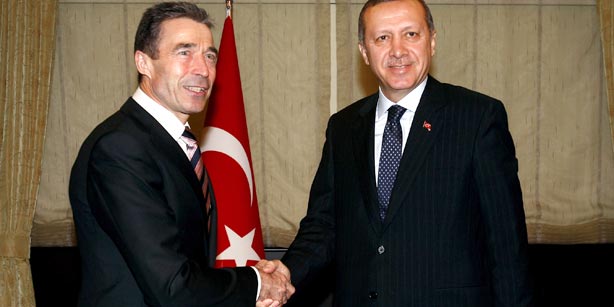 From Emine Kart, Zaman:  NATO’s chief held talks with Turkish leaders on Monday in Ankara to discuss the prospect of cease-fire in the northern African country of Libya in line with a UN Security Council resolution calling for “the immediate establishment of a cease-fire,” and aimed at protecting civilians in the country, officials said.

“In addition to discussing ways of maintaining the cease-fire in Libya, Erdoğan and Rasmussen exchanged views on the need to show respect for the will of the Libyan people,” sources from the prime minister’s office told Today’s Zaman.

Following the meeting with Erdoğan, Rasmussen held separate talks with Davutoğlu at the ministry residence. There was no official statement issued following talks at the prime minister’s office. Davutoğlu, in a statement after meeting Rasmussen, said the Turkish side underlined  importance of “territorial integrity of Libya, providing life security for Libyans, giving an end to killing of civilians and providing an eventual normalization at once.”  (photo: Zaman)