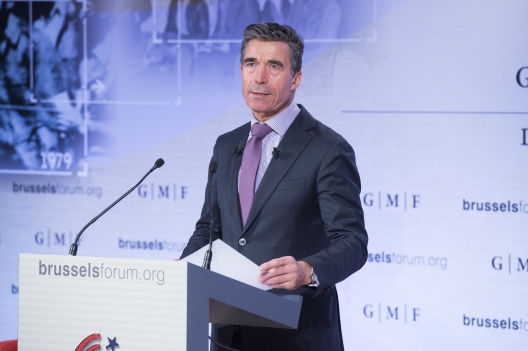 The crisis in Ukraine is a geo-political “game-changer” for NATO Allies who must strengthen their economic and military ties in wake of Russia’s military aggression against Ukraine, NATO Secretary General Anders Fogh Rasmussen said in a speech delivered at the ‘Brussels Forum’ on Friday (21 March 2014). “The transatlantic bond and NATO matter more for Europe than ever before,” he said.

The Secretary General set out three priorities which he called on Allies to address in wake of the crisis; to reaffirm Allied commitment to collective defence, strengthen support to Ukraine and the wider region, “and to make clear that we can no longer do business as usual with Russia.” Mr. Fogh Rasmussen said the September NATO Summit in Wales will be a key one for Allies to ensure they have the full range of capabilities to deter and defend against any threat.

The ‘Brussels Forum’ is organized by the German Marshall Fund of the United States. Mr Fogh Rasmussen was taking part in a panel with his predecessors as Secretary General, Lord Robertson and Jaap de Hoop Scheffer.