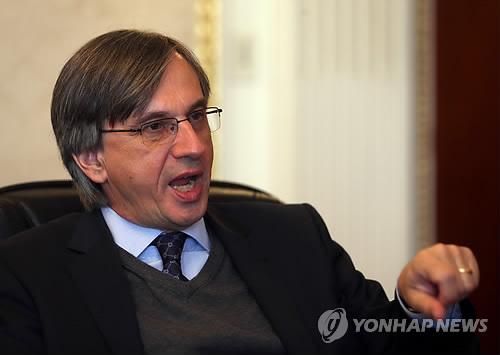 Dirk Brengelmann, the NATO’s assistant secretary general for political affairs and security, met with Seoul officials for an annual policy consultation, in which the two sides agreed to jointly develop the "Individual Partnership and Cooperation Program. . . ."

"We have been increasing cooperation with South Korea over the last years. We want to make sure that we have the same level of interoperability with all partners in the future," Brengelmann said in an interview with Yonhap News Agency.

He spoke on the sidelines of the Seoul Defense Dialogue, a senior-level defense forum established by South Korea. Vice minister-level and other senior officials from 15 Asia-Pacific countries, the European Union and the NATO are attending the inaugural meeting set to run through Friday. . . .

Although South Korea is not a member of the world’s biggest military alliance, Brengelmann said the two sides have maintained close cooperation by conducting missions in such countries as Afghanistan and Somalia.

South Korea has stationed hundreds of troops to protect its civilian reconstruction workers in Afghanistan as part of the NATO-led international security assistance force since mid-2010. . . .

The official also encouraged Seoul to continue to make counter-piracy efforts through greater collaboration and partnership working with NATO members.

A Korean contingency has been conducting anti-piracy missions off Somalia since early 2009. In January 2011, Korean Navy commandos raided a South Korean freighter that had been hijacked by Somali pirates in the Arabian Sea, rescuing all 21 crew members and killing eight pirates.  (photo: Yonhap)