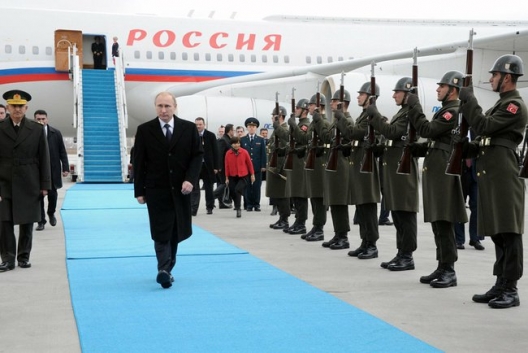 A casual consumer of Russian media might conclude the western Ukrainian city of Lviv, one of the strongholds of the country’s pro-EU uprising, has been overrun by violent fascists.

So a video recently uploaded to YouTube will prove disappointing. Called “Where are all the fascists in Lviv?”, it features a correspondent walking the city’s peaceful streets, interviewing slightly bemused — decidedly un-militant — shoppers.

The online video was produced and published by Nato. It is a modest new weapon the alliance is deploying as it seeks to fight back against a Kremlin information campaign that is posing a new worry for western policy makers alongside Russian bombs and espionage.

“Russia is weaponising information in this crisis,” says James Appathurai, the alliance’s deputy assistant secretary general for political affairs. “They are reaching deep into our own electorates to affect politics. . . .”

The fear among Nato officials and western policy makers is that the Russian campaign could fatally fracture an already fragile European consensus to maintain tough economic sanctions against Moscow for its behaviour in Ukraine.

In Germany, for example, Chancellor Angela Merkel is contending with a sizeable faction sympathetic to Russia’s President Vladimir Putin, whether for business or historical reasons. Other EU members also appear vulnerable to the Kremlin efforts to sow discord, particularly the impoverished former Soviet countries in southeast Europe. . . .

High-level delegations from across Europe have begun meeting at Nato’s headquarters in Brussels and in national capitals to discuss the challenge. The Lviv video — what Russian agitprop practitioners would call pokazukha, or a propagandistic publicity stunt — is one of the fruits of those meetings. . . .

Perhaps most significantly, the alliance has begun to co-ordinate “messaging” among its members, a senior official said. Shared lines are now being sent out to strategic communications teams working in the foreign ministries of members for use. Shortly before the Nato summit in Wales this September, the alliance also opened a new “centre of excellence” for strategic communications in Riga, Latvia, which is intended to serve as a clearinghouse for anti-propaganda ideas and research.

While Nato has joined the information war, many in the alliance acknowledge its efforts are still in their infancy, particularly when set against a vast Russian campaign.

“[We have] come a long way in responding . . . but clearly it is not enough,” Mr Appathurai says. “There are 20 or so people in Nato’s public diplomacy team who are at work trying to counter an organised, multi-faceted, well-funded Russian operation that is going on across the world.”